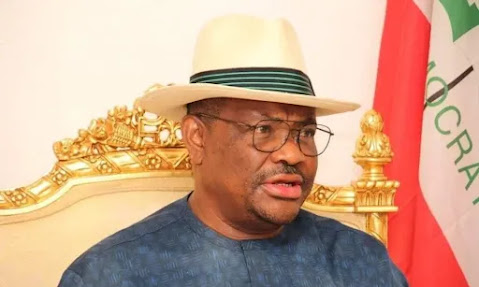 Governor Nyesom Wike of Rivers State has raised a fresh allegation against the Peoples Democratic Party, PDP, and the National Chairman, Iyorchia Ayu.

Wike accused Ayu of collecting N100 million and N1 billion from a governor.

In a media chat on Friday, the governor challenged the embattled PDP National Chairman to refute the corruption allegations against him.

According to Wike, “I don’t just come out and speak, let Ayu come out and say he did not collect N1billion. Let me tell you Ayu collected N100 million from a governor.

“If not for the love of this party, if we release what we have, Ayu’s children will go to him and deny him.”

Wike also vowed to spill more allegations if “we are pushed to the wall.”

The governor is spearheading PDP members calling for Ayu’s removal.

Many times, Wike had accused Ayu of mismanagement and fraudulent practices.

He also anchored his calls on the fact that PDP’s presidential candidate and National Chairman can’t come from the same region.