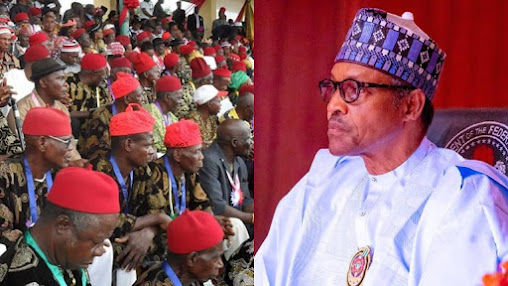 Ohanaeze Ndigbo, the Igbo apex socio-political organization, has urged President Muhammadu Buhari to consider a political solution and release the leader of the Indigenous People of Biafra, IPOB, Nnamdi Kanu.

Okechukwu Isiguzoro, the Secretary-General of Ohanaeze Ndigbo Worldwide, said Buhari should release and meet with Kanu.

He was reacting to Kanu’s letter requesting a political solution from Buhari.

Recall that Kanu urged Buhari to release him unconditionally from detention and drop all charges against him.

The IPOB leader is detained in the custody of the Department of State Services, DSS, after he was rearrested in June 2022.

The Nigerian Government had extraordinarily renditioned Kanu from Kenya in 2021.

Following his rearrest, Kanu is facing charges bordering on treasonable felony and terrorism at the Federal High Court, Abuja.

However, Isiguzoro said Buhari’s meeting with Kanu would end the sit-at-home order affecting the economic situation.

“Now that Nnamdi Kanu is the one writing Buhari himself seeking a political solution, I think the Federal Government, as a matter of national interest and security, should cash in on this opportunity and dialogue with Biafran agitators.

“According to the late MKO Abiola, nobody can give his head in his absence, nobody can have any form of dialogue with the Federal Government except Kanu.

“If the Federal Government sees it as a national interest of general importance, they should first grant presidential pardon to all those ready to dialogue with them, including Yoruba agitators and Northern agitators or those who pick up arms against the government.

“This would allow the Federal Government to have access to two vital ingredients that would help to stop the further sit-at-homes that have paralyzed the economic activities in the old Eastern region, comprising eleven states.

“And secondly, it will further stop the push for the disintegration of this country, Igbos are in all the local governments of this country, and it’s not in the majority interest of Igbos to leave Nigeria at the critical point in time because Igbos are the real Nigerians.

“So, the Igbos, as a matter of urgency, should grant Kanu’s request through the letter he wrote to Buhari, and Kanu is the best person to make this request to the Federal Government.

“Now, he has accepted and is remorseful and is ready to speak with the Federal Government. They should not allow this opportunity to pass by; the best political solution is to release Nnamdi Kanu and release about 400 people incarcerated in prison facilities across the country.

“By so doing, Buhari would save Nigeria from further hurt, referendum, and disintegration of Nigeria.”