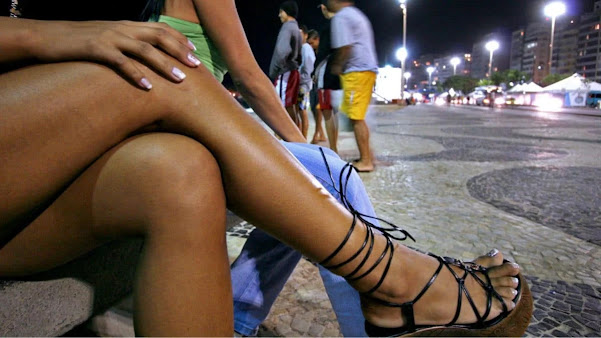 Residents of the Federal Capital Territory, Abuja, have expressed concern over the public nuisance being caused by commercial sex workers, popularly called ‘Olosho’ who are in every part of the city.

Recall that some officials of the Federal Capital Territory Administration (FCTA) in May 2019 raided a popular nightclub and arrested several female nude dancers.

Saga Gist observed that over the years, the level of commercial sex work in Abuja has continued to skyrocket despite the law prohibiting such activities.

Residents, who lamented the ugly trend, said most of the ladies involved in the commercial sex activities are underage girls who were trafficked into the territory from different States.

Saga Gist reports that underage prostitution and the operation or ownership of brothels are penalized under sections 223, 224, and 225 of the Nigerian Criminal Code.

This may not be unconnected to the reason why officials of the FCTA on September 17, 2020 demolished a popular brothel, Chris Garden and Guest Inn, at Dakibiu, Jabi, a suburb of the territory.

Chris Garden was a drinking shop, and also arguably one of the biggest – and perhaps oldest – sex centres in Abuja, a place where men and women converge to exchange sex and money.

There are still many brothels operating across the territory disguised as mere drinking joints. Most of the all-night bars have apartments attached to it where men of different demographics meet ladies for sexual pleasures.

In Kubwa, aside the already existing hotels, trending in that part of Abuja is the conversion of houses meant for residential purposes to hotels. There are few streets in Kubwa without two or more hotels.

Similarly, the presence of beer palours, lounges have greatly encouraged the business of commercial sex.

A resident of Kubwa, Bwari Area Council, Mr Alex Akor, who spoke to DAILY POST on Saturday, tagged several places as a no-go-area, stressing that the prostitutes, sometimes, force themselves on passersby.

He said, “Decent men don’t go to some areas in this Kubwa especially at night because of those Olosho girls. It doesn’t matter whether you have their time, they are ready to drag you into their net.

“It is so embarrassing when you see some of these girls along the road asking you to come over while talking all those rubbish talks.

“The worst is when you go to Sokale Roundabout in Dutse at night. You will regret what took you there. Just last month, I was there trying to look for someone that can fix my car and all of a sudden, somebody just beckoned on me.

“When I saw how she was dressed, I just told myself ‘this one na Olosho’, so I shouted at her to leave me alone. That was how she started fighting me and told everybody that I slept with her and refused to pay, you can imagine that”.

Pastor Elijah Michael of the Christian Evangelical Ministry, Abuja, who spoke on the matter, blamed poverty and lack of employment opportunity for the trend.

According to the man of God, the Nigerian government has neglected its citizens, stressing that people now do “unimaginable things just to survive”.

He said, “I have had several encounters with many of these ladies you called prostitute. Whenever we meet them during evangelism, I am always moved to tears. You will not understand why people do what they do until they open up to you.

“Some of those girls are good but their financial and other conditions forced them into the act. Some of them had told us several times that it is through the commercial sex business that they take care of their families.

“Our ministry has been helping some of them in the way we can. You go to some places even in broad daylight and you will see them almost devouring you. May God give us a good leader that would create jobs and alleviate sufferings”.

Also, a psychologist and PhD student in the Benue State University Makurdi, Mr Arumona Anthony who spoke with our correspondent in Abuja yesterday, expressed worry over the impacts the prostitutes create in the society, especially among children.

He said, “Like it or not, the prostitutes are with us both in the market, and other social gatherings, their mode of dressing, the way they talk can affect our children negatively and that is why the trend may not end anytime soon.

“Now, there is what we call non-declarative memory which is also called implicit memory, it unconsciously builds up in people.

“Our innocent children are exposed to these people even while in their parent’s car at night and I can tell you that many of them unconsciously copy the lifestyle and they live it when they are far from their parents”.

One of the sex workers who identified herself simply as Helen, told our correspondent that she was lured into the business by a friend since 2018.

“One of my friends brought me to Abuja in 2018 and I have been doing this since then. I left Akwa Ibom with her after she promised me she would introduce me to one business that will make me rich. I came here only to discover that this is what they do.

“I had no choice but to join them. Sometimes I make even 20k a day but some days are dry. Sometimes we fall back to our savings to keep life going”, she said.

Efforts to reach the FCTA on the matter proved abortive as Tony Ogunyemi, Chief Press Secretary to the FCT minister, Malam Mohammad Bello could not take his call and was unable to respond to a text message forwarded to him.