Serie A: Lookman on target as Atalanta secure top spot 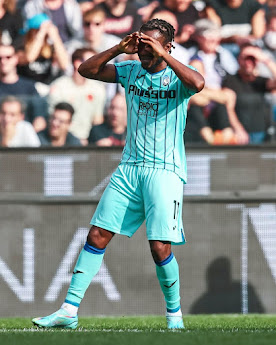 Ademola Lookman was among the scorers as Udinese and Atalanta battled to a thrilling 2-2 draw in their Serie A clash on Sunday.

Atalanta, who kept their unbeaten run intact, moved to the summit with 21 points from nine matches.

Lookman opened the scoring for Atalanta nine minutes before the break after he was set uo by Luis Muriel.

It was Lookman’s third goal in nine league appearances for Gian Piero Gasperini’s side this season.

Muriel doubled the advantage from the penalty spot six minutes before the hour mark.

The Zebras reduced the deficit two minutes later courtesy of a fine strike from Gerard Deulofeu.

Argentina defender, Patricio Nehuen equalised for the home team in the 76th minute.

Both sides were unable to find the winning goal, earning a share of the spoils.