Serie A: Napoli must build on win at Roma — Osimhen 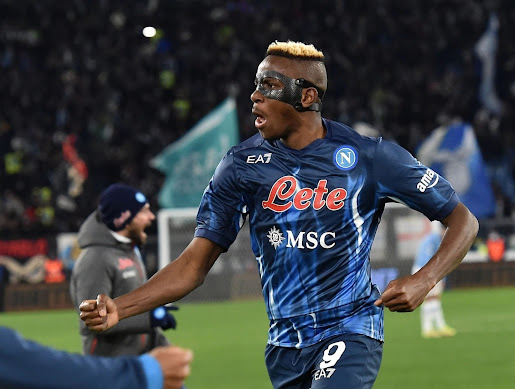 Napoli forward, Victor Osimhen claimed the Parthenopeans want to keep on building the momentum after they recorded their 11th consecutive win against AS Roma on Sunday night.

The game had been heading towards a goalless draw until Osimhen produced a moment of magic to unlock the Roma defence.

Matteo Politano launched the ball forward from inside his own half and Osimhen blazed past Chris Smalling before firing home from an impossible angle.

“Congratulations to the team, Roma gave us a tough time and are a good team also, but we showed we are also a very good team and it is not easy to beat us. It was important for me to get the goal for the team and these three big points,” the Nigeria international told DAZN.

The 23-year-old reflected on his celebration after scoring the decisive goal.

“The hand gesture is for my daughter and my girlfriend. Every time I score a goal, I dedicate it to them, they are the most important thing for me,” he added.

“Those five weeks out were tough for me and they gave me the motivation to keep going.”