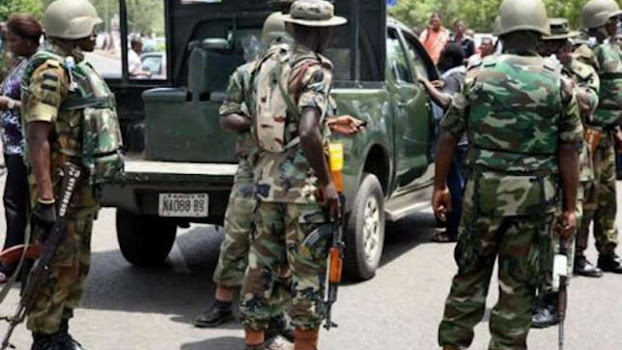 Two siblings have reportedly been killed for allegedly smuggling foreign rice in Ogun, causing pandemonium in the state.

The men were allegedly killed by operatives of the Nigerian Army.

It was gathered that the officers had accosted the older of the two brothers in an attempt to seize his vehicle which contained bags of foreign parboiled rice.

“In the course of an altercation between the man and the soldiers, some people called his younger brother popularly known as Saheed Elegusi. Saheed rushed to the scene and the two of them were shot dead by the soldiers. We don’t know when soldiers become customs officers,” a source who simply identified herself as Adekemi told our correspondent.

It was alleged that the soldiers immediately fled the scene after shooting the siblings as angry youths took over the streets in protest.

The mob had set bonfires on the Sango-Idiroko international road, disrupting vehicular movements for hours.

Oyeyemi said the slain Air Force man was in uniform when he unknowingly ran into the mob who lynched him.

“Yes, the incident happened yesterday. I think it was caused by an argument between them (the two brothers) and the men of the Nigerian Army. We are still investigating.

“But do you know that the people killed an Air Force officer who was just passing on his own? He was just going on his own, he had nothing to do with the crisis. They just mobbed him and killed him because he was in uniform.

“Anyway, an investigation is ongoing. The Commissioner of Police has directed the Homicide section to take over the matter. The situation has been brought under control. The area is calm now. The DPO of Owode and some other policemen were able to move into the scene quickly. But unfortunately, the Air Force officer was killed.”