U-17 Women’s World Cup: Will Flamingos suffer same as Falconets 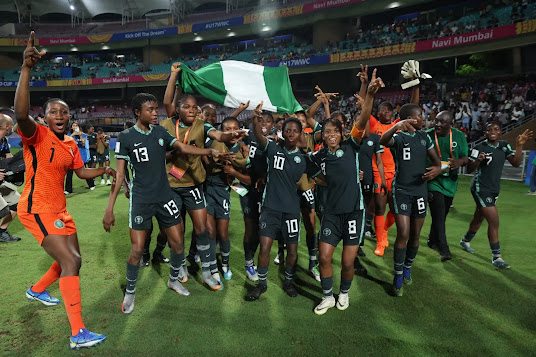 On Friday, Nigeria’s U-17 team beat their American counterparts to qualify for the semi-final of the U-17 Women’s World Cup ongoing in India.

This is the first time the Flamingos will be reaching this stage of the competition.

During the ensuing penalty shoot-out, goalkeeper Faith Omilana proved her class as the West Africans won 4-3.

The 16-year-old kept out two penalties to help the Flamingos beat the Americans.

Next up for Nigeria is the winner between Tanzania and Colombia.

Not to be a killjoy, but it feels this is how far they could go.

The Bankole Olowookere-led girls will face much more superior opponents and tougher games, as they enter the business end of the competition.

They might not make it to finals, to even stake a claim for a trophy. So will all that excitement fizzle out as quickly as it builds up?

And what about the Nigeria Football Federation (NFF), who are well known to snub teams that do not win tournaments?

Just in August this year, Nigeria’s U-20 Women’s team, Falconets overstayed by 24 hours at Istanbul following their exit at the Women’s World Cup in Costa Rica.

They were enroute Abuja after bowing out of the tournament, following a 2-0 defeat to Netherlands in the quarter-final stage.

Pictures of the team sleeping on the floor at the Istanbul Airport surfaced on social media, with fans blaming the NFF for negligence.

Almost a month ago, Ibrahim Gusau was elected the new NFF president and there appears to be a fresh optimism around him.

“It’s the first time getting to the semi-finals and we have a new NFF president. So things should be different this time hopefully,” Ibukun Aluko, who is the Team Manager of Lekki United tells newsmen.

“And with the way the girls are going, they should get to the final at least.

“The NFF president will also want to capitalize on the story and it’s a good thing for the Flamingos,” he added.