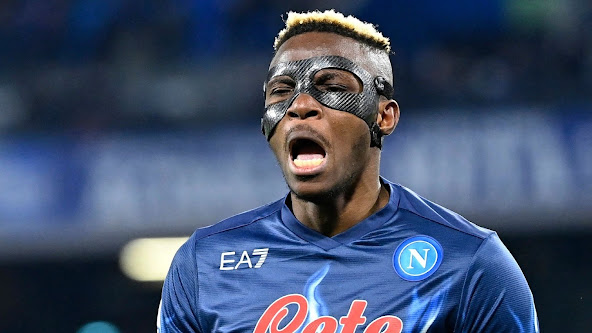 Napoli forward, Victor Osimhen, scored on his return from injury as the Partenopei sealed a place in the knockout stage of the UEFA Champions League courtesy of a 4-2 win against Ajax.

Osimhen has been sidelined since picking up an injury in Napoli’s matchday one encounter against Liverpool on September 9.

The Nigerian international took to the field on 50 minutes as replacement for Giacomo Raspadori.

With the scoreline at 3-2 and Ajax threatening a comeback, Osimhen scored Napoli’s fourth goal of the game in the 89th minute.

It was the striker’s first ever Champions League goal for Luciano Spalletti’s side.

He has now scored three goals in six appearances across all competitions for Napoli this season.

His compatriot, Calvin Bassey was also in action for Ajax in the game.

Bassey was booked in the 66th minute.