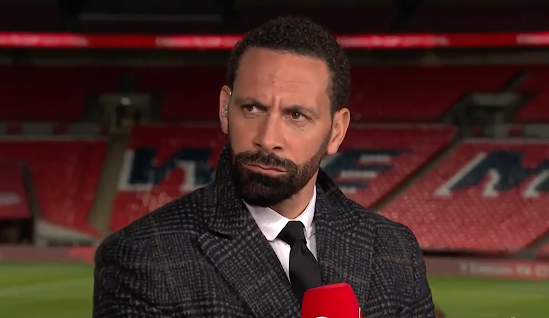 Manchester United legend, Rio Ferdinand is adamant that referee Daniel Siebert did the right thing to send off Fikayo Tomori during Chelsea’s Champions League clash with AC Milan on Tuesday.

Ferdinand said it was indeed a red card.

Tomori, a Chelsea youth team product, and was sent off after 18 minutes as he appeared to tug Mason Mount on the shoulder inside the box.

The referee awarded a penalty which Jorginho converted to give the Blues the lead.

Pierre-Emerick Aubameyang doubled the lead for the Premier League side to secure all three points and make it back-to-back wins over the Italians.

“As a young defender you question how Tomori allowed himself to get into that situation,” Ferdinand said on BT Sport.

“Mount’s movement was great and it’s a foul anywhere in the pitch. The rule is the rule, it’s a red card.”