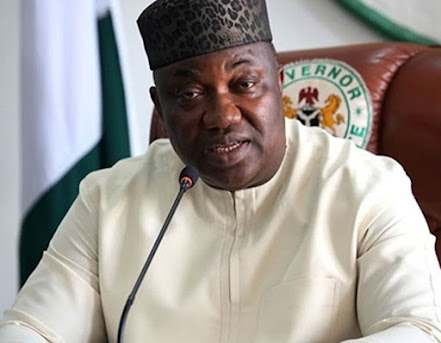 It is quite unfortunate that some disgruntled elements with selfish political interest ahead of the 2023 general election would mischievously use the name of Eha-Alumona youths in a failed attempt to undermine the genuine efforts that Governor Ifeanyi Ugwuanyi’s administration in Enugu State has made in giving the people of Eha-Alumona in Nsukka Local Government Area a sense of belonging through interventions in their roads which were hitherto neglected for over 50 years by previous administrations at the state and national levels.

It is on record that Governor Ugwuanyi’s administration is the first to intervene in Eha-Alumona roads in the last five decades through the construction of line drains, erosion control works and earthworks on the 16km erosion ravaged Eha-Ulo/Eha-Etiti/Eha-Ndiagu-Mbu road and the 24km Premier Junction-Umabor-Mbu road, under RAMPII project covering 40km.

The good news is that the youths and the leaders of Eha-Alumona have come out decisively to dissociate themselves from the recent dubious and mischievous communiqué by the so-called ‘Eha-Alumona Youths Association’, which deliberately undermined the remarkable interventions the present administration in Enugu State made in the community as well as the efforts the government is making to remedy the section of Eha-Ulo/Eha-Etiti/Eha-Ndiagu/Mbu road affected by erosion.

The Eha-Alumona youths and stakeholders have said that the said communiqué does not represent their opinion on the subject matter.

They have equally condemned those behind the communiqué for cheaply falling into the dirty hands of a few desperate, mischievous and insatiable political elements in Nsukka zone who are chasing shadow against the governor for refusing to succumb to their selfish political agenda that negates the principles of equity, justice and fairness in the zoning of the governorship position in Enugu State.

It is also on record that in appreciation of these unprecedented interventions, the people of Eha-Alumona including their stakeholders and six traditional rulers in 2021 paid a thank-you visit to Governor Ugwuanyi at the Government House, Enugu, where they acknowledged that they are one of the major beneficiaries of Gov. Ugwuanyi administration’s rural development policy, and declared that no past administration did what Gov. Ugwuanyi has done in their land in terms of infrastructural development and empowerment of their people.

From the foregoing, it is obvious that the makers of the communiqué and their sponsors have ulterior motive and should be disregarded as they are only playing dirty politics that will fetch them nothing.