2023: Atiku has only 7 governors working for him – Oshiomhole 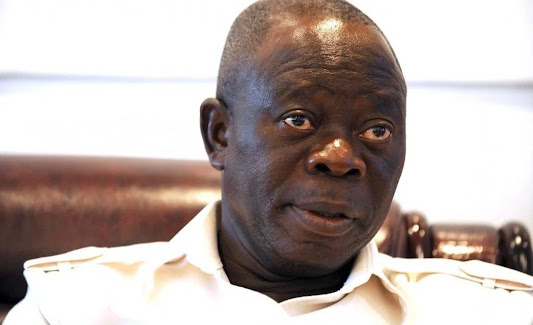 Ahead of the 2023 general elections, Comrade Adams Oshiomhole, a former National Chairman of the ruling All Progressives Congress (APC), has insisted that the Peoples Democratic Party, PDP, presidential candidate, Atiku Abubakar, has only seven governors supporting him.

Oshiomhole also expressed absolute confidence in the ability of the APC’s 2023 presidential candidate, Asiwaju Bola Tinubu, to have a landslide victory at the poll.

According to the former Edo State governor, all the 23 APC governors are working persistently towards the success of Tinubu in the 2023 general elections.

Oshiomhole stated this while addressing State House correspondents after a closed-door meeting with President Muhammadu Buhari in Abuja on Friday.

He said he was in the State House to express formal appreciation to Buhari for his determination and commitment to the APC ahead of the 2023 elections.

Oshiomhole said, “So if you ask me how we are doing, we are doing very well. Whereas the other [PDP] is now battling with five governors that backed out, and you find out how many governors they have, we have twenty-three.

“Now, if you add twenty-three to five, I am not saying the five are with us, but we have twenty-three with five. I guess that is twenty-eight. If you subtract twenty-eight from thirty-six, it means only eight governors, in fact, seven, because the other one in APGA isn’t there.

“So, while he [Atiku] has seven governors working for him, we have twenty-three working for us, and we have five who are neutral. You know, when you’re voting, when I was in ILO, you vote for, against, or you abstain. Abstinence is as good as voting against.”