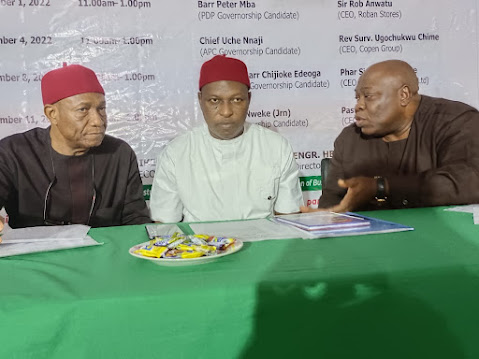 The governorship candidate of the Labour Party in Enugu State for the 2023 general elections, Barr. Chijioke Edeoga has lamented what he called the failure of successive administrations in the State to address the issue of poverty and income generation.

Edeoga said key in his agenda is to work with other governors and business leaders to make the South-East a single robust market.

He spoke at the Enugu Business Community Townhall Meeting with Governorship Candidates, organised by the Enugu State Chamber of Commerce Industries Mines and Agriculture (ECCIMA), held at the Chamber’s secretariat complex in the State.

He said it was unfortunate that successive administrations had weaponized poverty for their selfish political advantages and lamented that with her enormous human and natural resources, Enugu State should be one of the most vibrant economies in the country.

“The South-East should be a huge thriving single market by now, but the opportunities inherent in this has been ignored, largely because of the ego of some of the leaders.

“But I will work assiduously to lower the imaginary boundaries that are erected to divide us. In doing this, I will collaborate with the governors and business leaders across the southeast and south-south to ensure that the losses that have been incurred in the past as a result of selfish politicking are reversed through cooperation in the interest of the people,” the Labour candidate said.

He said past excuses that Enugu was a civil service State had become untenable, and said his focus was to make the State, a business hub, catering to diverse commercial activities in manufacturing and processing, agriculture, tourism, commerce and technology.

Edeoga said his focus will be to integrate all the people of the southeast who have chosen to make Enugu their home, into the affairs of the state.

“Enugu was built with the talent and resources of all the people of the old eastern Nigeria. We are one and the same people and my government will demonstrably welcome everyone to the rebuilding process. In doing this, I will ensure that commissioners and other competent people that will work with me when we are sworn into office, are selected from all the people that have chosen to make Enugu their home, irrespective of their states of origin,” he stated.

On his plans for agriculture, he stated that his administration will focus on the acquisition of land across the State and allocating same to businesses interested in farming, with attention to solve food production challenges and ramping up processing of goods to maximise the value chain.

Attention, according to him, will be on crop production, poultry and livestock, cashew and the peculiar spices that grow in the state as well as palm produce.

On bridging the rural-urban divide, Edeoga, who began his career as a journalist, said he will create new cities across the State, link the rural areas with motorable roads and ensure that Enugu capital is organically decongested and spread to other areas

“The fucus on Enugu urban for development is both unproductive and unsettling. We will expand Enugu beyond the GRA and make land available on demand to discourage the reselling and racketeering that has made land prohibitive for investors in the state,” he said.

Going back memory lane, Hon Edeoga revealed that, as a member of the House of Representatives, he played a key role in the establishment of the permanent site for the Enugu Trade Fair Complex and invited members of the Chamber to work with him towards elevating the business community for employment generation.

He revealed that past of his plans for agricultural revival would be to deploy local government staff to work in facilitating productive agricultural and industrial ventures, saying his government will not tolerate redundancy an truancy among civil servants and public officials.

Edeoga, who said his wish when incumbent Governor of the State, His Excellency, Ifeanyi Ugwuanyi invited him to work in his administration, was to be Commissioner for Education, lamented the decadent public education system in the state and vowed to return the state to glorious heights through training, retraining of teachers, and through regular supervision and monitoring.

“It is unfortunate that education has not been getting its due attention in the state over the past years. But, just as in other areas, we will make all the needed interventions to reverse the decadence. All of us were products of the public school system and we owe it to our conscience and posterity to make things work again. The things that made us to achieve our renaissance under the late Dr M.) Okpara and the great Nnamdi Azikiwe will have to be reinvented. We want to return power to the people,” the Labour Party candidate said.

Responding to Hon Edeoga’s presentation, the President of ECCIMA, Barr Emeka Nduagwuike, thanked the guest for his frank presentation and wished him success in his electoral quest.

“We are impressed by your show of courage here. We are even more impressed that you did not come here to read from a manifesto someone could have written for you. It shows that you are speaking from the heart and from your convictions on what will be done to enthrone a new era of prosperity for the people of Enugu,” Nduagwuike said.