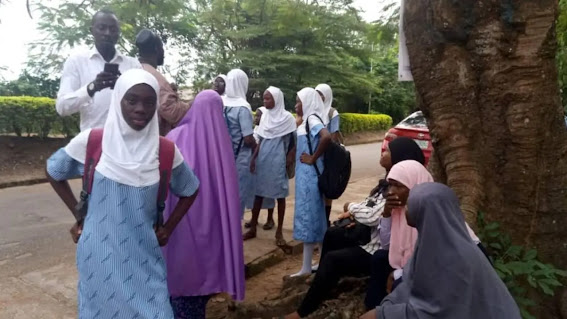 The absence of Justice Moshood Ishola of Oyo State High Court in Ibadan has stalled the resumption of the hearing of the hijab case involving some female Muslim students and International School, Ibadan (ISI), University of Ibadan.

Saga Gist recalls that some female Muslim students of ISI had dragged the school, its principal and UI to court over their refusal to allow them (students) to use hijabs on top of their uniforms.

The hijab controversy between the students and the school management started in November 2018.

It lead to the closure of the school for one week in November 2018.

The students, who dragged the school to court, insisted that it is their fundamental human right to use hijab.

Saga Gist reports that the case which is supposed to come up on Tuesday at Court 7, Oyo State High Court, Ring Road in Ibadan was stalled.

Our correspondent who was at the court on Tuesday reports that the hearing of the matter between the female Muslim students and UI- ISI management and Muslim Rights Concern (MURIC) was stalled due to the absence of Justice Ishola who was supposed to decide on the matter.

The students, their parents and other stakeholders were surprised when they were told that the case could not come up because the judge was absent.

Our correspondent gathered that the students engaged Mr Hassan Fajimite as their counsel while MURIC engaged Mr Yusuf Anikulapo as its counsel in the matter.

The Parents Teacher’s Association (PTA) in the school engaged Mr Olalekan Tani as their counsel.

Consequently, the counsels to both the plaintiffs and the defendants picked 10th January 2023 for the resumption of hearing on the matter.