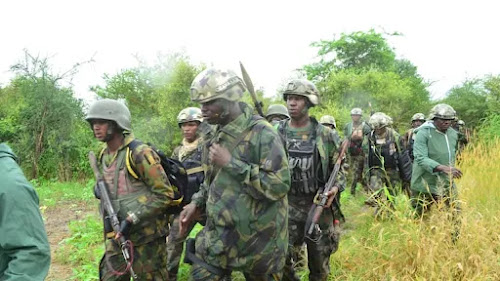 Nigeria’s fight against insurgency and non-state actors recorded major victories in the past two weeks with troops of Operations Hadin Kai and Hadarin Daji neutralising at least 44 terrorists while over 50 others were arrested in North West and North East regions of the country according to the information released by the Defence Headquarters.

Major General Musa Danmadami, Director, Defence Media Operations, who made the disclosure in Abuja on Thursday, November 3, 2022, at the bi-weekly news briefing on the operations of the armed forces reported that troops of Operation Hadin Kai in the North East had, between October 20 and November 2, captured 27 suspected Boko Haram and Islamic State of West Africa Province (ISWAP) terrorists and neutralised 19.

Danmadami said that the troops also recovered a large cache of arms, ammunition of different categories, and other logistics supplies during the period.

He added that an air interdiction mission was conducted on a terrorist convoy along Tunbum Aliyu, near Lake Chad, a terrorist location Southwest of Maiduguri.

“During the period in focus, a total of 145 Boko Haram terrorists and their families comprising 30 male adults, 33 female adults and 82 children surrendered to troops at different locations within the North East theatre of operation,” Danmadami said.