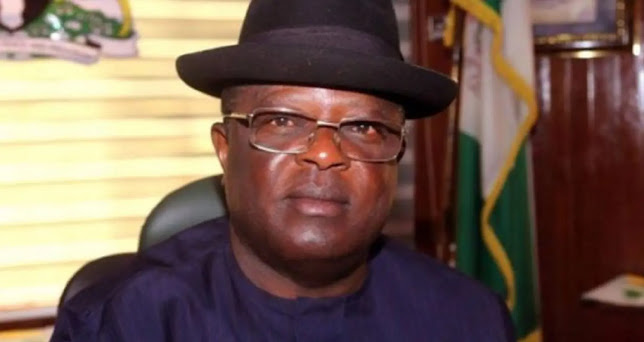 A Coalition of Civil Society Organizations, on Sunday, slammed a 24-hour ultimatum on Governor David Umahi of Ebonyi State over the recently signed Executive Order 3 of 2022.

The Coalition said should the ultimatum expire without the Governor abrogating the order, he would face litigations.

Saga Gist reports that Governor Umahi had last week signed an Executive Order banning the use of primary school premises, marketplaces and parks for campaigns by political parties ahead of the 2023 general elections.

The Governor insisted that political parties who want to use the school, market and park facilities must apply and should pay a refundable sum of N5million to the ministry of education in the State.

However, at a press conference in Enugu, the Enugu State capital, the groups describing the order as obnoxious, anti-democracry and in contravention of the Constitution of the Federal Republic of Nigeria.

They condemned the restrictions placed by the governor of Ebonyi State through the Executive Order Number 3 of 2022 on public gatherings and the use of public spaces for campaigns at a time the Electoral Act and INEC timetable mapped out for political parties to reach out to the electorate through campaigns.

Spokesman of the groups, Comrade Sampson Oko Nweke said that such ban was tantamount to an ambush on the democratic process and a deliberate attempt to frustrate the peaceful conduct of the 2023 general elections in Ebonyi State.

“It is an act of unconscionable corruption for Governor David Umahi to ban other political parties from campaigning in the state even when Umahi has converted Akanu Ibiam International Conference Centre which is a public property to the secretariat or All Progressives Congress and is campaigning freely in public spaces and with public resources.

“The operation of section 1(5) or the 1999 CFRN (as amended) does not permit that rights expressly conferred on Ebonyi people by both the Nigerian Constitution and Electoral Act 2022 be taken away or encumbered via a malicious executive order.

“Governor David Umahi is hereby advised to respect the Nigerian constitution which he swore to protect by withdrawing his unconstitutional executive order inmediately,

“Governor Umahi is hereby put on notice that should he fail to withdraw the execuuve order restricting campaigns within 24 hours from now, a legal action shall be instituded to challenge his contravention of the Nigerian constitution and to set aside his obnoxious order,” he said.

Nweke noted that that the ruling APC in Ebonyi State had continued its campaigns across with State resources and therefore demanded that the same free space enjoyed by the APC be extended to every other political party in the State.

The groups also raised the alarm over what it termed reported cases of abductions, trial by ordeal and infringements on the rights of Ebonyi citizens who are members of opposition political parties by agents of Ebonyi State government.

The groups noted the alleged abductions of a former federal legislator and Labour Party Senatorial candidate, Hon. Linus Okorie, who is major opponent of Governor David Umani in the 2023 Ebonyi South senatorial district contest on 16th October, 2022 and the alleged twin deadly attacks on the campaign train of APGA governorship candidate in Ebonyi 2023 general election, Prof. Benard Odoh, on one hand, and on his supporters, on the other hand, at Iboko in Izi LGA of Ebonyi State allegedly by Ebubeagu militia and a team of Ebonyi State Government officials led by the Coordinator of Development Centre, Mr ra ya on 20th October, 2022 as well as the alleged abduction of a former aide of the governor of Ebonyi State and member of PDP, Uzoma Agwu on 21st October, 2022 and others.

They expressed worry over the Ebonyi State Police Command’s alleged acquiescence to the take over of her constitutional duties by the Ebonyi State Governor and his Ebubeagu Security Network.