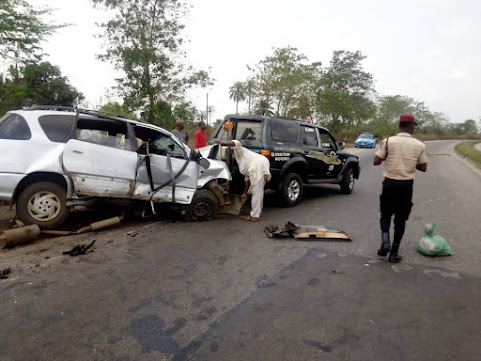 It was learnt that the road crash occurred around 7pm along the Abeokuta-Siun-Sagamu Road, Ogun State.

Confirming the incident on Friday, the Ogun State Traffic Compliance and Enforcement (TRACE) Corps said the accident occurred at Adedero in front of Adaranijo Filling Station, along the highway.

According to him, the cement truck marked WDL418XA, was emitting fumes and had no visible rear lights.

The emission was said to have blurred the vision of the Sienna bus driver, who was speeding, making him to ram into the truck unknowingly.

”All the victims were occupants of the Toyota Sienna which bore number plate, AAA307GN.

“One of the passengers who did not die immediately after the accident was rushed to the Federal Medical Centre, Abeokuta, where he gave up the ghost,” Akinbiyi said, adding that the remains of the deceased were deposited at the State Hospital, Ijaiye, Abeokuta.

While commiserating with families of the victims, TRACE warned drivers of articulated vehicles to always service their vehicles, asking them to ensure all their lights are working well.

The traffic agency urged all drivers to avoid speeding and desist from night travels.