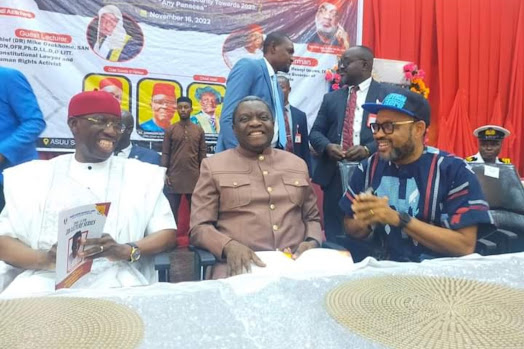 Delta State governor, Senator Ifeanyi Okowa has said that the insecurity currently bugging the country was a result of the bad seed sowed a few years back.

Okowa stated this in Anambra as a special guest at the 11th Zik Lecture Series held at Nnamdi Azikiwe University, Awka.

The governor described the security situation in Nigeria as a hydra-headed monster that has undermined public safety and is threatening the continued existence of Nigeria as one united, indivisible country.

“The surge in mass kidnappings, insurgency, banditry, herder-farmer conflicts, ritual killings, and other acts of terrorism is, to say the least, frightening. With the advance in technology, terrorists are becoming more sophisticated in their operations, using more advanced technologies including drones, GPS systems, and encrypted messaging services to spread propaganda and recruit others into their network.

“It is my considered view that Nigeria is reaping the harvest of the bad seed it sowed a few years back by obliging kidnappers with ransom payments. It was a fatal mistake that spawned a huge industry in kidnapping,” he said.

According to him: “There is also a strong link between increased terrorism and inequality and inequitable distribution of wealth. The widening gulf between the rich and the poor in our country is alarming.”

He further noted: “Equally alarming is the poverty rate, which stood at 40 per cent in 2021, and is believed to be around 45 per cent in 2022, which translates to 90 million citizens living below the poverty line. This has led to disenchantment and feelings of alienation among our teeming youth population, leading to rise in cybercrimes, kidnappings, ritual killings, and other violent acts that undermine our national security.”

Okowa said other contributory factors to the current state of insecurity in the country include the absence of modern security architecture, easy access to weapons by citizens, lopsidedness in power sharing, religious bigotry and intolerance, and the lack of respect for fundamental human rights of the citizens by the government.

Proffering solutions, the Delta State governor outlined: “Going forward, we need to urgently draw up a holistic plan to address our security challenges in the short, medium, and long term.

“Aside from a modern security architecture anchored on technology, we must muster the political will to deal decisively with criminals, regardless of their ethnic groups, religions, or status.

“This is imperative to tackle the problem of herdsmen-farmers conflict, which is fast becoming the greatest threat to our nation’s unity and economic well-being.

“The nomadic Muslim Fulani pastoralists and the largely Christian farmers of various ethnicities have continued to clash resulting in loss of farmlands, economic crops, cattle, and lives.

“This threat to our country’s stability and unity needs to be tackled urgently to reduce the level of insecurity and to ensure food security. It is my considered view that ranching and cattle colonies with [the] support of the Federal Government is a way out of this quagmire.

“Furthermore, criminal herdsmen must be apprehended and made to face the law, and Internally Displaced Persons need to be quickly resettled in their homes.”

Speaking about the forthcoming election, Okowa, who is Peoples Democratic Party (PDP) vice presidential candidate, said he is optimistic that in line with the guidelines of the new Electoral Act, which compels Bimodal Voter Accreditation System (BVAS) and electronic transmission of results, hijacking of ballot boxes and other election-related violence will reduce.

He added that as much as Nigeria needs a strong leader, it also needs to build strong institutions. He mentioned Nigeria’s institutions that need to be strengthened to include Police, media, judiciary, legislature and INEC among others.