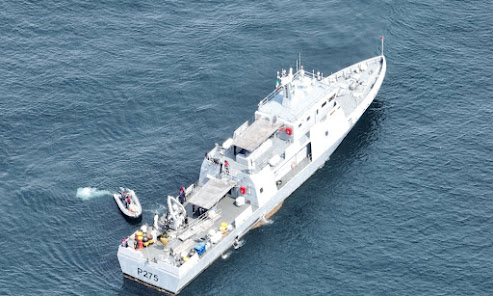 NNS OJI (P275), the largest of the series, was specifically manufactured operations in the Gulf of Guinea.

Most of the 43-meter structure are built with steel, generated at Naval Dockyard Limited, a unit of the NN.

OJI has a 30mm remotely operated gun, three 12.7 mm machine guns with an additional 40mm grenade launcher which is optional.

The boat is fitted with modern navigation and communication equipment, a Simrad radar control station, and a RHIB at the rear for boarding.

In late October 2022, China delivered a 46-meter patrol boat and other military equipment to the Navy.

The handover ceremony took place at the NNS Beecroft Jetty Apapa in Lagos.

Defence Minister, retired Major General Bashir Magashi said the gesture was part of the bilateral agreement between the two countries.

The vessel is similar to the 38m patrol boat, NNS Sagbama, also donated to Nigeria by China in 2015.