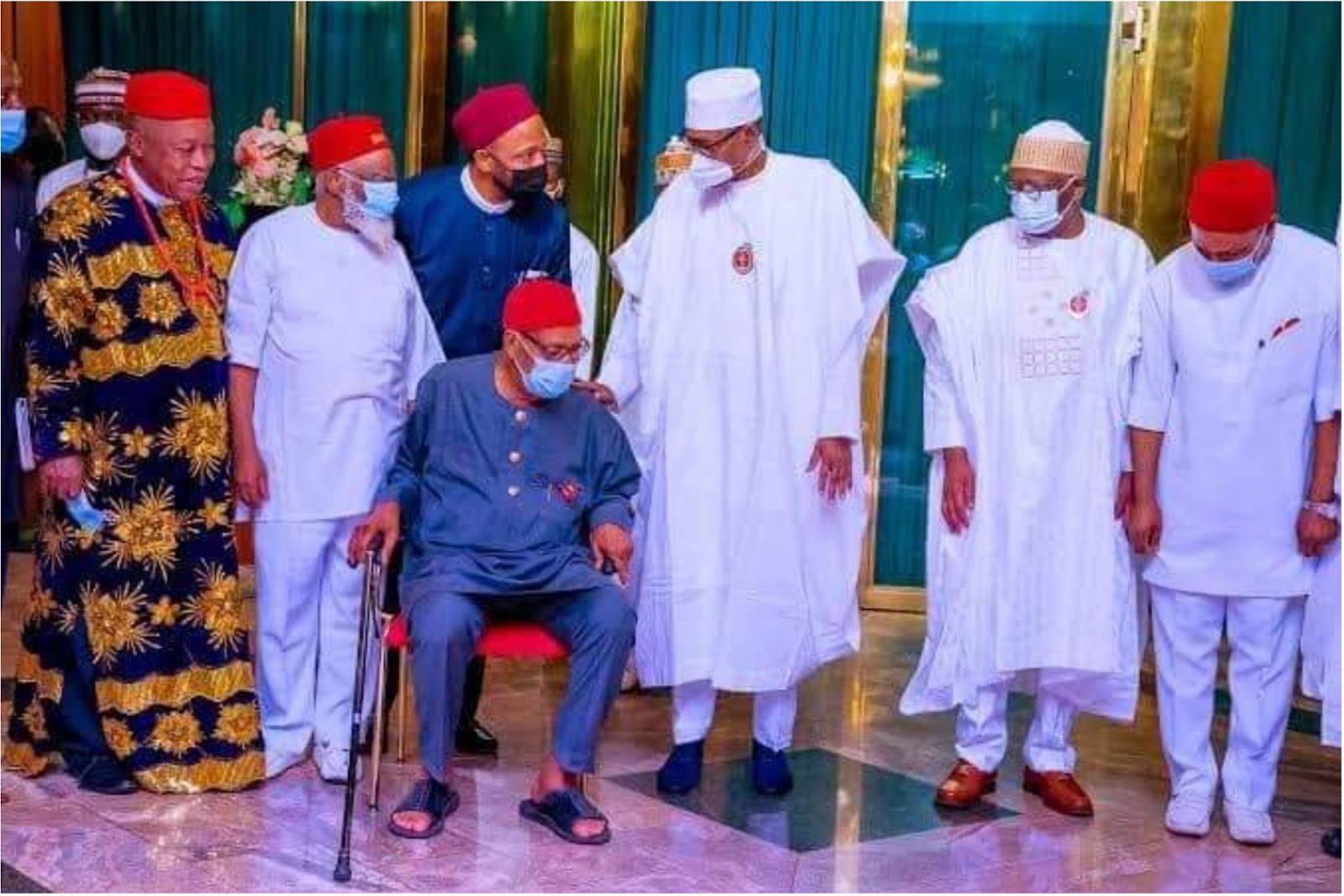 For the people of the South-East region, it is one death too many.

Saga Gist reports that the 93-year-old former parliamentarian died as one of the surviving respected Igbo leaders.

Residents say his death is even more painful considering that he died without achieving his last major wish.

It could be re-called that in November 2021 the nonagenarian had led other eminent Igbo leaders to President Muhammadu Buhari, during which he requested for the release of Mazi Nnamdi Kanu, the leader of the Indigenous People of Biafra.

He had begged Buhari to release Kanu to him as a way of political solution to the disquiet in the South-East zone.

Other members of the delegation were former Governor of Anambra State, Chukwuemeka Ezeife, Bishop Sunday Onuoha of the Methodist Church, former President of Igbo socio-cultural group, Aka Ikenga, Goddy Uwazurike and Tagbo Amaechi.

Amaechi told Buhari that the situation in the South-East was “painful and pathetic,” as businesses had collapsed, while education was crumbling amid fears.

He promised that if Kanu was released to him as the only First Republic minister still alive, “he (Kanu) would no longer say the things he had been saying.”

Responding, Buhari had told his visitors that the request was a tough one.

He, however, said owing to the age of the leader of the delegation, Amaechi, he would consider it.

The President had said, “You’ve made an extremely difficult demand on me as the leader of this country. The implication of your request is very serious. In the last six years, since I became President, nobody would say I have confronted or interfered in the work of the judiciary.

“God has spared you (referring to the ex-minister), and given you a clear head at this age, with a very sharp memory. A lot of people half your age are confused already. But the demand you made is heavy. I will consider it.”

DAILY POST, however, reports that six months after, Buhari made a U-turn, declaring that the law would run its course of Kanu’s trial.

The event was in Ebonyi during his two-day visit to the State. He met with Igbo leaders as part of the visit.

And addressing them, Buhari, who had earlier promised to look into the request made by the elder statesman, said the court would determine the fate of Nnamdi Kanu.

The President told his audience made up mostly of South-East Traditional Rulers’ Council that, “I have listened carefully to the various appeals from the elders to the traditional leaders regarding a wide range of options, and as I have said previously, this matter remains in the full purview of the courts where it will be properly adjudicated.

“My worry is for our hardworking and innocent civilians, for whom life is already tough and would like to earn a decent and honest living.

‘‘There are many that fit this profile and the government owes them that obligation to protect lives and property.”

This statement from the President dashed the hopes of Amaechi and indeed the entire people of the South-East zone.

Though the now late Amaechi later repeatedly pleaded that his wish be granted by the Buhari government, it never came to be until he transited early this morning, Tuesday.

He had looked up to a peaceful South-East and end of the worrisome Monday sit-at-home, which would be made possible by Nnamdi Kanu’s release but that desire never came to fruition.

The Appeal Court had acquitted and discharged Kanu but the Federal Government returned to the same Court with a stay of execution application, which was granted.