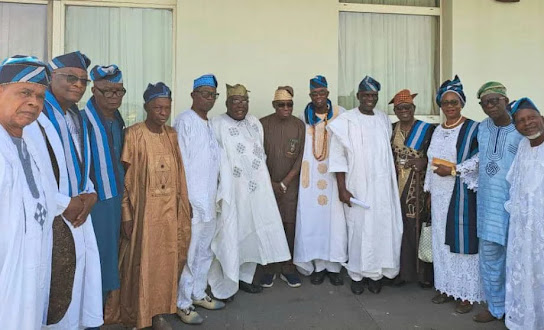 The delegation, led by Chief Ajibade Oyekan, discussed the growth and development of the South-West region.

The meeting was held at the Olusegun Obasanjo Presidential Library (OOPL) Penthouse residence in Abeokuta, the Ogun State capital.

The former leader endorsed devolution of powers and called for sincerity, unity, decency, diligence and bluntness on issues.

Obasanjo stressed that education without required skills for empowerment and employment would not bring the desired results.

“Youths have education but they have no skills. And education without skills in this age and time is nothing”, he said.

On the agitation by Yorubas, the ex-President disclosed that he recently understood that what most of the agitators wanted was devolution of powers.

“When I interviewed 12 persons on their understandings of what restructuring is all about, what I got was different. Some said they want three, four regions.

“Some said they want 12 states. I got to understand that all they were asking for is devolution of powers and this is not too much to ask for.”