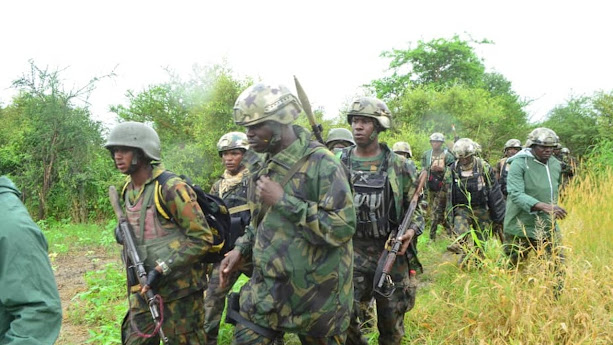 Troops of Operation Hadarin Daji operating in Zamfara State have reportedly neutralized a bandits’ leader popularly known as Bada, rescuing some kidnapped victims in a forest in the state.

It was gathered that some of the bandits escaped with various degrees of gunshot injuries in the forest.

The Director, Defence Media Operations, Major General Musa Danmadami in a press statement on Monday said Bada was the bandit who attacked Yar Tashar village market and killed some farmers on 13 October 2022.

It was gathered that Bada was killed after troops responded to bandits’ attack on farmers harvesting their produce at Yar Tashar village in Maru Local Government Area of the state.

The Operation Hadarin Dani spokesman noted that the troops recovered one motorcycle, some weapons and valuable items from the bandits.

He said the troops responded to the bandits’ attack at Gamraki village, Kwatarkwashi District of Bungudu Local Government Area of the State.

“The troops discovered and engaged the bandits who had kidnapped two locals in a fire for fire operations”, he added.

“Troops battled the bandits, rescued the kidnapped victims, neutralized one bandit while others fled with gunshot injuries”

“Operation Hadarin Daji recovered one AK 47 rifle, one magazine, two rounds of 7.62mm special among others”