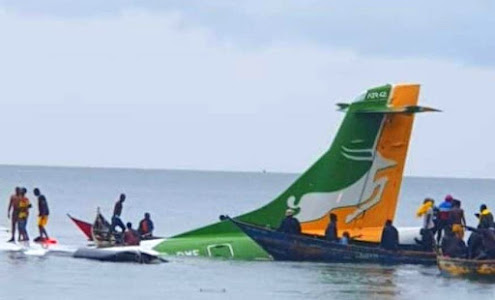 A passenger aircraft crashed into Lake Victoria in Tanzania on Sunday morning.

The lake, regarded as Africa’s largest by area, is near the Bukoba airport in the capital of the Kagera Region

The Precision Air plane crash was about to land when it went down due to bad weather.

The flight was coming from Dar es Salaam, the country’s largest city.

Reports say about 49 passengers were on board; fatalities remain undetermined.

“Those who have been rescued have been taken to our referral hospital”, the officer disclosed.

Chairperson of the African Union Commission, Moussa Faki Mahamat has consoled the country.

“Our hearts and prayers go to the families of passengers on-board a plane that crashed into Lake Victoria, with our full solidarity to the Government & people of Tanzania”, he tweeted.