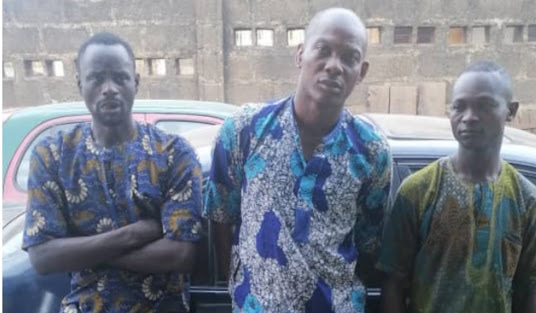 The police in Ogun State have arrested three men for allegedly snatching a car in Abeokuta.

Oyeyemi said they were apprehended on November 9, following a report lodged at the Oke-Itoku Police Station by one Olusesi Akingbile who reported that his Toyota Carina E car with registration number AAB 576 TF, parked in his house at Ijemo on October 12 2022, had been stolen by unknown persons.

Upon the report, Oyeyemi told newsmen on Saturday that messages were sent to all police formations in Ogun, asking them to be on the lookout for the missing car.

The police spokesperson said the stolen car was on November 9 sighted in a mechanic village along Ajebo Road, by police officers attached to Kemta Division while on routine patrol.

“The car was quickly intercepted, and Moses Adewale Abiodun, who was with the car was promptly apprehended,” he said.

He explained further that the police, during preliminary investigations, had discovered that the suspect had two others accomplices.

“The other two were traced and arrested, while another Blue Carina E car with registration number, AAA 565 GJ, suspected to have been stolen, was recovered from them,”.

Meanwhile, the Commissioner of Police in Ogun, Lanre Bankole, has ordered a thorough investigation of the suspects before they are charged to court.