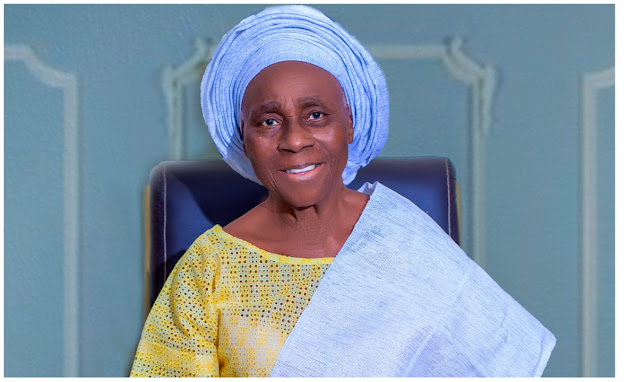 Juliana Soyebi retired as a senior matron (at which hospital ) in 2000 , in this interview with Daily Post she speaks about the brain drain in the country’s health sector, poor parenting in this dispensation and her upbringing among other issues.

Can we meet you ma?

I am Julianna Omoladun Soyebi, A well-qualified nurse and I retired as Senior Metron in 2000.

My parents are From Ekiti state, My father’s name is Mr. Joshua Edogbudi Olatunde and he worked as a driver in Nigeria Railway Corporation (NRC) Lagos, he is from Ikere Ekiti in Ekiti State. My Mother is from Ayedun Ekiti in Ekiti State, her name is Lydia Tinuola Olatunde. I was born on November 13th 1942 in Kaduna State.

According to my mother, my parents met at Futua in the North and came down to Kaduna where I was born and later moved to Kano state before my father was later transferred to Southeast, Enugu State. On the day of Nigeria’s Independence (October 1st, 1960) my father was transferred to Offa Railway Station, Kwara State.

Tell us about your childhood

I started my childhood in Offa where I started going to school. I went to Ijagbo Baptist Grammar School Offa. After my common entrance, I got admission to Methodist Girls High School, Ifaki Ekiti where I spent four years and did a nursing examination which I passed.

I went straight to nursing and I finished up my general nursing in 1969 at Tunga Magaji General Hospital, now Niger State.

How do you meet your husband?

I met my husband when I moved down to Offa after I completed my General Nursing course in the North. I and my husband Mr Elijah Oluyemi Soyebi started courtship in 1970.

We got married in Ilorin registry after my 3 years program in Psychiatric Hospital and I had my first child (late Mr Oluwatoyin) before I proceeded to Midwifery nursing school in Ibadan.

My husband is a staff of Nigeria Railway Cooperation (NRC) working in Offa but later influenced his transfer to Ibadan (NRC) station because of me so that we can live together in the same place.
However, he was later transferred to (NRC) station in Àgbàdo while I was working in Psychiatric Hospital in Ibadan but that doesn’t course any issue between us because he usually comes to check on me and i do go to Agbado to check on him when I am off duty too.

Could you tell us little about your Nursing career

I started my nursing career in 1964 in Tunga Magaji General Hospital, because in those days you will be working as you are studying later I wrote an exam to study psychotics nursing in 1971 at Adeoyo hospital in Agbadagbudu Ibadan, Oyo State. which I was admitted to.

I started working in the Adeoyo Psychotic Hospital while I was studying there and spent a three-year program there I later proceeded to study Midwifery nurse where1 I had the opportunity to work at the same time I was their student too.

I worked with Adeoyo psychotic hospital till the creation of Osun state out of Oyo State and I was transferred to Osun State.

I retired as senior metron at Osogbo General Hospital.

Why do you choose nursing as a profession?

I chose nursing as a profession because I like to care for people and the profession provided me an opportunity to travel to the UK to work there as a nurse in 2006 but I let go of the opportunity because of my husband’s illness.

My travel agent informed me that the process is complete and I should set for travel abroad on the very day my husband’s stroke started. My husband advised me to go to the UK and come back to take him later but I insisted that I can not leave my husband for illness and travel.

My husband died on June, 26th 2006 two months after the incident. I tried all I could to save him but God loves him more.

Tell us About the challenges you have encountered

I didn’t have many challenges in nursing because I find joy and happiness in doing it.

The challenging experience I can remember vividly in the Midwifery hospital is that of a lady who could have died of superstition. This lady put on a black ring with belief that the ring would prevent her from having miscarriages that she usually had before.

However, she didn’t tell us about the ring, she has been in labour for a long time but the ring was preventing her from delivering the child despite my efforts.

But as an experienced nurse, I need to start querying her after serious prayer before she then talks about the magic ring on his finger and its usefulness.

I needed to call her mother to the labour room to come and remove the ring from her and I took the delivery successfully immediately. Imagine what could have happened if we did not discover the magic ring, she would have died with the baby after too much effort on failed delivery if I am not an experienced nurse.

The Happiest day of your life

The happiest day of my life is being able to see myself live up to 80 years today because I don’t know I can live long like this. God is the one that saves me up till this moment because I would have died this year in August. My blood sugar level was reduced to 31% which is abnormal and I was unconscious as a result of that which could have taken my life but God brought me back to life, I am happy.

Governments need to increase the salary of health officials to retain them just like the way foreign countries are doing.

If the government are caring for Nigeria health workers and provided good health facilities, they wouldn’t need to go abroad to receive treatment because Nigeria health workers are well trained to give excellent health care, but the government failed to provide good health facilities that would enable them to receive the kind of treatment they travel to get here in their Nigeria.

There is no treatment they are giving abroad that we can not give here in Nigeria, we were well trained to that level and that’s why foreign countries keep on employing Nigerian Doctors with huge salaries.

The Nigerian government doesn’t value our experienced Health workers because of their selfish interest and we keep losing experienced Doctors to foreign countries everyday, yet they seem not concerned about the damage it might cause the next generation.

We experienced hardship during our time in service, we are underpaid but we don’t get an option, we endure it. There are a lot of options and alternatives nowadays and our Doctors are using them.

All of my children studied with hardship in their higher institutions because my salary is not enough to settle their school bills after their father’s demise.

I urge the youth to take responsibility for their future so that things will change for the better.

What’s the secret behind your long life?

God is my secret, I was so happy that God saved me. This August I would have died in this very house. My blood sugar just come down because I have one instrument with me.

What has changed in the society?

A lot of things have changed, and there are a lot of challenges but thanks to God by His grace I was revived in the sense that as I was getting old there were lots of things coming in, there was force, I couldn’t work and it started this year.

Lots have changed because I am now in another new world.

What can you say about poor parenting in the society?

Poor parenting usually affects children in society because if parents are not able to handle their children it results in children taking hard drugs, weed and that lands them in the psychiatric hospital.

I used to advise parents to beware of what they should say to their children, sometimes, I would stop dome parents from using negative words for their children because it’s not good and bible verses also preach against it.

The parents that used negative words on their children are the course.

The parents need to talk positively about their children’s life because we don’t know the type of angle that’s passing.

Confrontation interviews would go a long way to healing the society if parents follow the health expert’s advice. This is what we were taught in the Psychiatric program.

Tell us About your spiritual life

I love Jesus because if not for his love of him to me, I would have died.

I moved closer to God when my first born die and he has always helping me
I have only God as my helper and he is helping me. I usually fast & pray whenever I face any challenges but that is when I have strength, I don’t have strength to fast again but I can pray and God will answer me.

Through prayers you will gain a lot of things, because when God sees that you are loyal and have no helper, he would be merciful to you

I appreciate all my children starting from Oluyemisi Folakemi Towobola and her husband Emmanuel Shinayo Towobola, Sunday Oluwagbemileke Shoyebi, Esther Adenike Ayeni and her husband Mr Joseph Alani, Samson Olukayode Shoyebi
I always pray to God for protection over my children and my grandchildren.