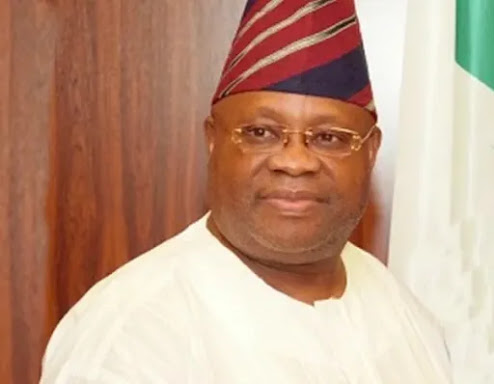 The allegations that Adegboyega Oyetola, the immediate past governor of Osun State and other former political appointees in his administration carted away vehicles worth N2.9 billion have been described as untrue by the state chapter of the All Progressives Congress (APC).

Making this known in a statement signed by Kola Olabisi, the Osun APC Director of Media, the party alleged that all the panels set up by the government already had their reports even before they were inaugurated.

While describing individuals behind the allegations as comedians, the party held that they were seeking ways to mitigate the effect of their embarrassing outing at the Osun Election Petition Tribunal.

At the resumed seating of the Tribunal on Thursday, INEC acknowledged that they were incidents of over-voting during the July 16, 2022, gubernatorial election in the state.

According to the APC statement, “Take a look at the video attached, you will observe the vehicles they announce that they are looking for are already being used by the current deputy governor. Yet, they claimed they did due diligence.

“How did they come about the cost? Are they using the current market value or how? Talking about this particular panel, have they concluded their sitting? When was their report submitted?

“We asked these questions because only two days ago, the governor was quoted to have said any of the former political appointees that want his November salary should return the vehicle in his custody.

“Or is that also part of the recommendations of the panel?

“For clarity’s sake, the former governor and his deputy, by law and convention, are entitled to certain privileges and these are well documented.

“Apart from those vehicles which their offices permit them to take home, they never took any other item.”

The party explained that the government formally approved for the commissioners and other appointees to take their used cars as a take-home gift for their meritorious service to the state.

The gesture was carried out since they were not entitled to either pension or gratuity and it was not only limited to political appointees as career officers in the past had also been allowed to go home with their used vehicles as a gift on retirement for serving the state meritoriously.

Saga Gist had reported on Friday that the Osun State Government through a statement signed by Olawale Rasheed, the spokesperson to Governor Ademola Adeleke had directed Oyetola, his wife Kafayat Oyetola and other former political appointees to immediately return official vehicles in their possession.

The directive was given by the Asset Recovery Panel of the Osun State Government headed by Bashiru Tokunbo Salam.

The panel had alleged that the former officials had gone away with the various models of vehicles without any legal basis for such action.

According to the panel, “The former Deputy Governor has more than seven government vehicles in his custody contrary to the provisions of the law.”

Saga Gist recalls that on his inauguration on November 27, 2022, the Osun State Governor, Ademola Adeleke disclosed that he will issue an Executive Order setting up committees one of which is to recover assets from officials of the outgone administration of Adegboyega Oyetola.

Also, during the inauguration of the committee, the state’s Deputy Governor, Kola Adewusi publicly disclosed that the official quarters of the Deputy Governor were nothing to write home about.

While stating that the state was in a dire strait, Adewusi decried the high level of looting that had occurred in the quarters.

The former Deputy Governor, Benedict Alabi in his defence explained that he had moved out of the official quarters months before his tenure expired.

Alabi also revealed that some of the vehicles in his possession were busy personal properties.

Former officials in the Oyetola administration have also come out to say the vehicles in their custody were legally signed off to them by the state government under Adegboyega Oyetola.

They also accused Governor Adeleke of withholding the November salaries of past political appointees who served during the outgone administration.

An allegation to which the state chapter of the All Progressives Congress (APC) has called on the State House of Assembly to intervene and find a lasting solution.