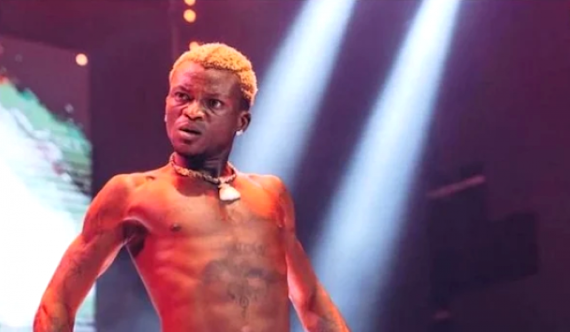 Controversial Nigerian singer and songwriter, Habeeb Okikiola, a.k.a Portable, was on Friday stoned on stage by angry fans in the Agege area of Lagos State.

The concert, which was held at the Agege Stadium, has Portable enlisted for the show titled ‘Afro and the Beats’.

A mild drama started when the show organiser, singer Adekunle Temitope, better known by his stage name, Small Doctor introduced Portable to the audience but he was vehemently rejected by the crowd.

In a viral video on social media, the singer who was rejected and stoned with plastic bottles by the members of the audience, was seen telling them that they had “invited a madman”.

He said, “Agege, the devil cannot build a house close to Jesus. Know what you are doing, you are the one that invited a madman. You will see madness.”

Small Doctor was also seen pleading with the audience for calm. According to him, “It won’t be well with anyone that disrespects you, do you want to put me to shame?, Please don’t be angry.”

But the aggrieved crowd insisted that Portable must leave the stage.

Recall that Portable had on Thursday rained curses on Small Doctor, claiming to be more popular than the fuji pop musician in Agege.

It is understood that the audience loyal to the Agege fuji pop musician considered his remark as a disrespect to the region.