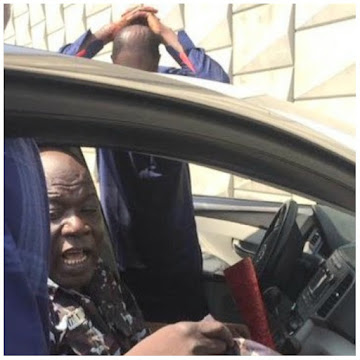 The police are concealing the name of the officer who killed Bolanle Raheem on Sunday in Lagos.

The victim, a lawyer, was fatally shot on Christmas Day in the Ajah area of the state right in the presence of her family.

A viral photo shows the culprit, an Assistant Superintendent of Police, ASP, and a man, reportedly the husband of the victim, who leaned on a car with both hands on his head.

Although the Inspector-General of Police and the Lagos State Police Command have issued separate statements, neither identified the shooter.

Nigerians are angry that the security agency was in the habit of protecting the name of notorious officers arrested for extortion, killings, and other crimes.

IGP Usman Baba described the shooting by the policeman attached to Ajiwe Police Station as unfortunate.

Baba, who ordered speedy investigation and prosecution, commiserated with the family, friends, and colleagues of the deceased.

He assured of justice and warned personnel of the Force to be professional and people-oriented in the discharge of their duties.

Lagos Commissioner of Police, Abiodun Alabi said the officer has been taken into custody alongside his team members.

The case has been transferred to the State Criminal Investigation Department in Panti, Yaba, for investigation.

A statement by Police spokesman Benjamin Hundeyin recalled that a similar incident occurred at the same location recently, barely three weeks ago, when Gafaru Buraimoh was shot dead by an inspector also attached to Ajiwe Police Station.

Hundeyin who noted that the breach of standard operating procedures (SOP) and rules of engagement were “embarrassing,” added: “The Nigeria Police Force will carry out a reappraisal of its rules of engagement in a bid to put an end to such avoidable ugly incidents.”