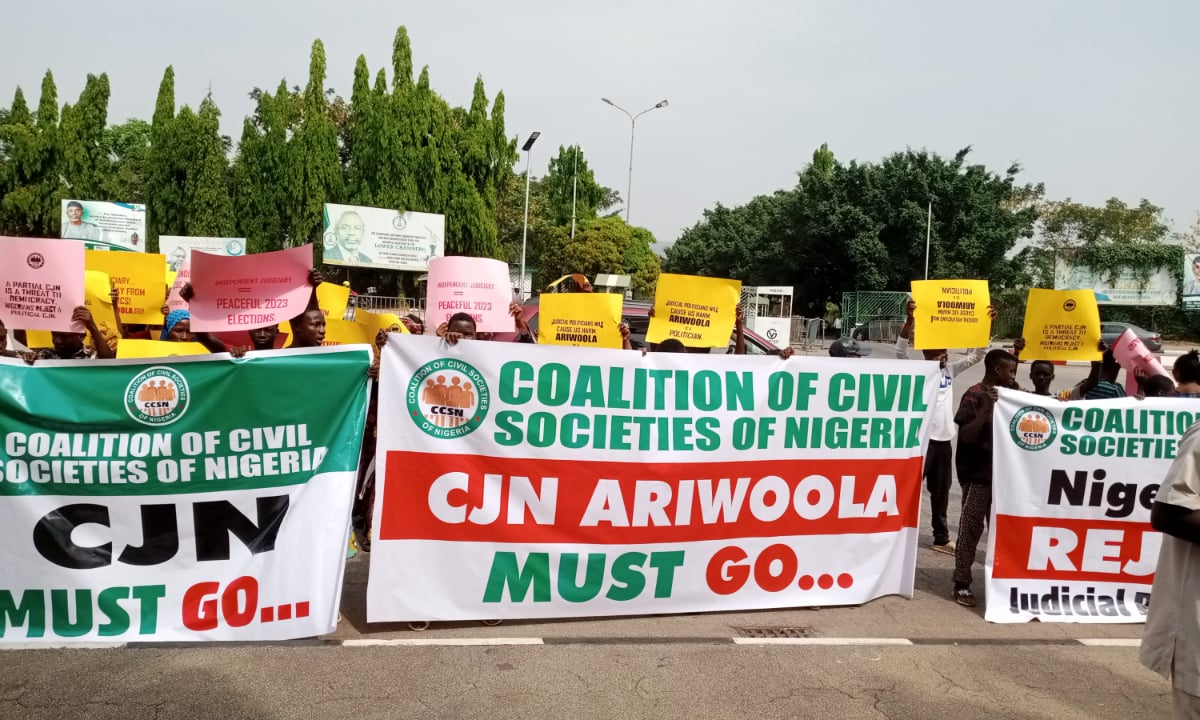 The Coalition of Civil Societies has petitioned the National Assembly insisting on the sack of the Chief Justice of Nigeria, Justice Tajudeen Ariwoola over his alleged partisanship.

Ariwoola had during the commissioning of a project in Rivers State made statements conflicting with the impartiality expected of the judicial arm of government.

The Coalition in a petition addressed to the Senate President, Ahmed Lawan titled, ‘Condemnation of CJN’s Interference in Political Issue’, said a partisan CJN will put the 2023 elections at risk.

Addressing journalists on Friday in Abuja, the Convener, Nathaniel Balogun said the independence of the judiciary could not be deemed satisfactory since the CJN has already taken a side in a political dispute within a political party out of the 18 others who are sponsoring candidates in the 2023 elections.

It noted that with the CJN’s recklessness in politics, it was obvious that should there be disputations in 2023, his influence in the judiciary might deny a lot of candidates justice.

The coalition pointed out that the partisan nature of the CJN portends a great danger to the smooth dispensation of justice in the case of an electoral dispute before, during and after the 2023 general election.

It added that Nigerians would not fold their arms and let this pass, stressing that from Ariwoola’s body language, it was becoming clearer that no party or candidate can get justice in the supreme court he oversees.

It stated: “We demand his immediate sack as Nigerians no longer have confidence in his person as an impartial judge. Chief Justice of Nigeria Tajudeen Olukayode Ariwoola’s affinity in political dispute is a mark of interference capable of truncating the good efforts already put in place by the National Assembly.

“Nigerians may not be the deciders of electoral choices they make. With his continued stay in office, the courts may subvert the people’s choice since the judicial head is now affiliated to the political class.”

The group said if the CJN refuses to resign, it would press for all legitimate means through citizens’ revolt for him to vacate the office.

“How do we explain that the man saddled with the impartial role of dispensing justice is now on the side of a particular group in a political dispute? Given the fact that 18 political parties are up in the race for the 2023 general elections, we wonder what interest the CJN had leading him to obstruct the impartiality of the Judicial arm of government he currently heads.

“It is unspeakable, flippant, unpardonable and unprofessional for the Chief Justice of Nigeria to openly identify with a side he is affectionately romancing in a sensitive political race that would be decided by Nigerians.”