I will not abandon my predecessor’s projects – Gov. Adeleke 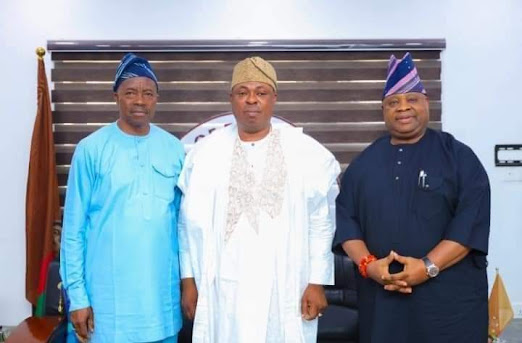 Governor Ademola Adeleke of Osun State has stated that his administration will not abandon any of the projects embarked on by the previous administration of Adegboyega Oyetola in the state.

Governor Adeleke who promised to sustain the harmonious relationship between the Executive and the Legislature to move the state forward also expressed his readiness to ensure that everything needed for the smooth running of the Osun State House of Assembly is promptly addressed.

The governor made this known on Monday when he paid a courtesy visit to the Osun State House of Assembly to solicit the support of the legislators in moving the state forward.

Maintaining that government is a continuum, he called on all and sundry to support his administration, noting that since election has come and gone, the state needs good governance, which his administration is ready to provide.

“Now that election is over, I want everyone to join me to move the state forward; government cannot do it alone. For we to have an enviable state, everyone must be ready to play their part for the state to move forward.

“I promise that my administration will not cheat anyone; it will be an all-inclusive government where everybody will be happy and peace will reign supremely in the state,” he said.

Earlier, in his welcome address, the Speaker of the House of Assembly, Timothy Owoeye assured that the Assembly will do everything to support the government in line with global best practices.

Owoeye also disclosed that they may only disagree with the Executive based on facts of the law and not sentiments.

The Speaker added that the legislative and executive arms of government must strengthen their communication channels to communicate effectively, devoid of fake news and rumourmongering.

He assured that the 7th Assembly under his watch will not be blinded by party affiliation and that the Assembly owe it a duty to the people and future generation to rise above party politics and deliver the dividends of democracy to the good people of Osun.

He added that the legislature the world over is a sacred and respectful institution and as such, the opinions and resolutions of the arm are pivotal in every matter of state.

The Osun House of Assembly speaker urged the governor to continue to uphold the rule of law and principles of fair hearing as any deviation from these may lead to anarchy and crisis in the state.

The Speaker of the Osun Assembly had earlier visited the governor after his inauguration on Sunday, November 27, 2022. At the meeting, the governor also promised to work with the state legislature to move the state forward.

Political watchers had predicted a clash between both arms of government in the state due to the executive orders issued by the governor, part of which ordered a revert from “State of Osun” to “Osun State.”

The Osun Assembly had kicked against the order noting that the state’s name and appellation were derived through a legislative process.

The Assembly also preferred the status quo to remain on the order given by the governor directing the most senior civil servant to take control of the affairs of local governments.