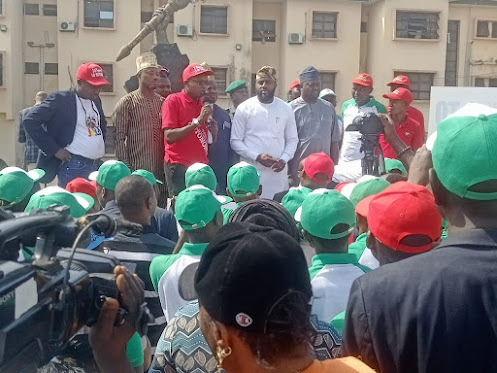 Members of the National Union of Local Government Employees (NULGE) in Oyo State have called on stakeholders in the state to support local government autonomy.

It was gathered that the call for local government autonomy has been on for several years and has been in their chatter of demands presented to the Speaker of the state House of Assembly, Adebo Ogundoyin.

Some of the demands include financial, administrative and political autonomy for the local government.

The union noted that these would create unhindered access to local government funds to develop the grassroots.

NULGE President in the state, Ayobami Adeogun, who spoke on behalf of his colleagues berated some governors over what he described as usurpation of power.

He maintained that the Nigerian constitution guarantees the existence of three tiers of government and that Oyo State ought to support local government autonomy.

He added that local government, being one of the tiers should not be made an appendage of the state under the guise of any joint allocation account.

Adeogun also advised the members of the state House of Assembly to support this vision.

“We believe that Oyo being the pacesetter’ state should be part of this history of being among states that have voted to support the bill for an amendment of the 1999 constitution of the federal republic of Nigeria.

“Oyo State should support this financial, administrative, and political autonomy, that’s the only way the local government can truly be independent and recognized as the third tier of government.

“The lawmakers must support this vision if they want to want to be on the side of history as honourable members. The confidence we reposed in the lawmakers must be justified at this point. They must remember they came to us to solicit for our votes to give them the mandate they’re running with”.