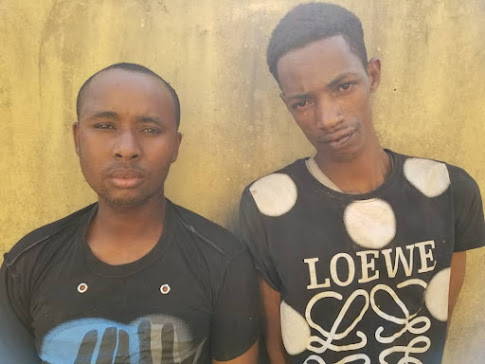 The police in Ogun State arrested two men, Umar Mohammed and Aliyu Mohammed, suspected to be members of a kidnap gang.

They were arrested on Wednesday following information received by policemen at the Ewekoro division that the kidnappers had abducted one Olorunsogo Oluwaseyi at Soyooye area of Abeokuta.

Police said they got information that the suspects and their victim had been sighted in a forest at Onigbedu, Ewekoro Local Government Area of Ogun State.

The command’s spokesman, Abimbola Oyeyemi, said the DPO of Ewekoro Division, CSP Sunday Opebiyi, had mobilized his men, in collaboration with So-Safe corps operatives, to the said forest.

“On sighting the men, the kidnappers fired guns at them, but the superior fire power of the policemen overpowered them, consequently two members of the gang were arrested and the victim rescued, while others escaped,” Oyeyemi said.

According to Oyeyemi, Olorunsogo Oluwaseyi, was kidnapped by six men on Monday in front of his house at Soyooye at about 7:45 pm.

He added that one gun with two live cartridges, two expended cartridges, the victim’s bag and some clothes were recovered from the suspects.

Meanwhile, the Commissioner of Police in Ogun, Lanre Bankole, has directed that the suspects be transferred to the anti-kidnapping unit of the State CIID, while ordering that the fleeing members of the gang be brought to book as soon as possible.