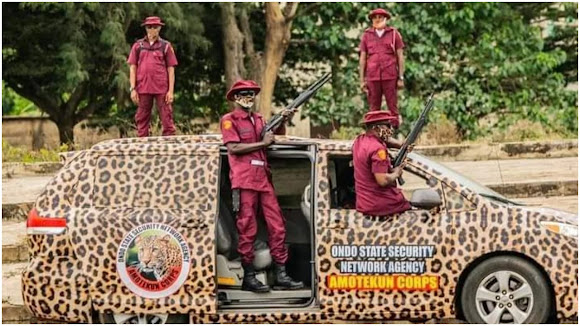 The Amotekun in Osun State has denied allegations that its personnel were involved in chasing away a traditional ruler, Sunday Akinwale, the Olunlosin, the Eleko of Eko Akala in Ifelodun local government area of the state.

In a statement by Amitolu Shittu, the Osun Amotekun Field Commander in Osogbo on Monday, the security outfit maintained that its personnel were not involved in the act.

Shittu also called on the general public to disregard information alleging the complicity of Amotekun Osun personnel in the unfortunate incident.

According to him, “Given the foregoing, We would like to inform the general public that the publication was part of an orchestrated campaign of calumny aimed at damaging Osun Amotekun’s reputation and bringing it into public odium, obloquy, infamy, scandal, scorn, and contempt.

“This is how they started the damages on the Nigeria Police which resulted in EndSARS Protest that almost destroyed the country in the year 2020, it has been noted that whenever criminals elements want to perpetrate their evil and their satanic plans that is when they published fake news, our resolve to stamp out the criminals in the state is not negotiable.

“Osun Amotekun Corps is an establishment of the law which no party can lay claim to as it belongs to the entire citizen of the state, we are nonpartisan.

“We, however, urge the promoters of the said publication to henceforth stop publishing news to damage the reputation and achievements of Osun Amotekun Corps.”

The Olunlosin of Eko Akala, Sunday Akinwale who was deposed in 2021 by the Elende of Eko Ende, Oba Rauf Olaniyan had alleged that an officer of the Osun Amotekun Corps and thugs chased him out of his palace after physically assaulting and beating him.

Akinwale who laid claim of being installed as a traditional ruler of Eko Akala by the Kate Akinrun of Ikinrun, Oba Olawale Adedeji revealed that the Elende of Ekoende had on several occasions threatened to deal with him by removing him as the traditional ruler of the town.

He stated that “The hoodlums broke the door to the palace at midnight and entered my bedroom where I was sleeping together with some members of my family.

“They dragged me out of the room, tore my clothes, and beat me. They forcefully ejected me and members of my family from the palace after beating us and didn’t allow us to take anything from the palace. All my clothes were left inside the palace.

“The thugs burgled the palace and took away some of my personal belongings and my wife’s valuables. They also vandalised my car and some other artefacts in the palace. The matter was reported to the police and nothing was done about it.”