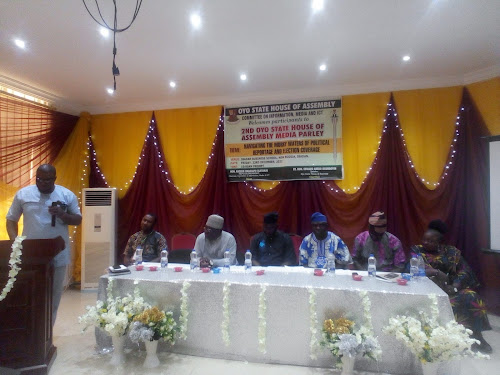 Members of the Oyo State House of Assembly have enjoined journalists in the state to feel free to approach them for comments and clarifications when issues arise.

The lawmakers made this disclosure during the second Oyo State House Media Parley theme, “Navigating the murky waters of political reportage and election coverage,” held on Friday in Ibadan.

At the event were the Speaker of the House of Assembly, Hon. Adebo Ogundoyin, who was represented by the Deputy Speaker, Hon. Muhammed Abiodun Fadeyi, and the Chairman of the House Committee on Information, Media and Information and Communication Technology (ICT), Hon. Kazeem Olayanju.

Others are a former acting Rector of the Polytechnic Ibadan, Mr Tade Ipadeola and a lawmaker representing the Iseyin/Itesiwaju state constituency, Hon. Bamidele Adeola.

The current house of assembly was inaugurated in June 2019.

The lawmakers have however appealed to journalists to approach them and seek clarifications on issues concerning the lawmakers and the state House of Assembly.

Olayanju, who spoke on behalf of his colleagues, said that media plays a critical role in the life of any society.

He advised the journalists to see the lawmakers as friends and brothers instead of as foes.

“They need information to propagate their activities.

“This media parley with the theme “Navigating the murky waters of political reportage and election coverage” is organise to appreciate members of the fourth estate of the realm since the inception of this 9th Assembly”.