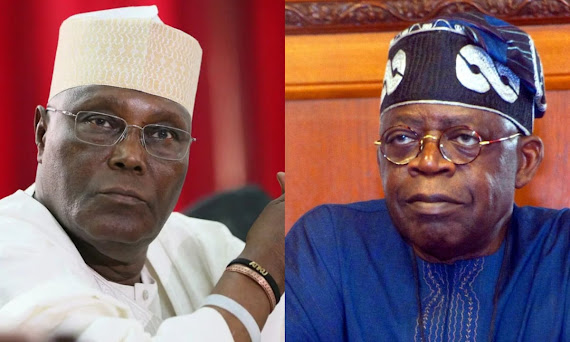 Barely 38 days to the presidential election scheduled for February 25, both camps of the All Progressives Congress, APC, and the Peoples Democratic Party, PDP, candidates, Bola Ahmed Tinubu and Alhaji Atiku Abubakar, respectively, have continued to trade words.

The attacks heightened over the week, with each calling for the arrest and disqualification of the other over allegations of graft, contrary to the peace accord signed by the respective presidential candidates ahead of political campaigns.

Recall that at the commencement of political campaign season, presidential candidates and the national chairman of their respective parties were made to sign a peace accord committing themselves to a peaceful campaign for the 2023 election. The signing was organised by the National Peace Committee in Abuja.

Saga Gist reported that some of the candidates that signed the accord were Peter Obi of the Labour Party, LP, Rabiu Kwankwaso of the New Nigeria Peoples Party, NNPP, and Atiku Abubakar of the Peoples Democratic Party, PDP.

However, the ruling All Progressives Congress, APC, candidate, Bola Tinubu, was absent but his running mate, Kashim Shettima, stood in for him.

Tinubu’s camp threw the first salvo last week when he called on Nigerians to worry about Atiku’s health and credibility and not his, adding that he (Atiku) must come clean on issues regarding his health and corruption allegations.

The Director, Media and Publicity of Tinubu, Shettima Presidential Campaign Council, PCC, Bayo Onanuga, who disclosed this in a statement, said Atiku ought to have stepped down from the race because he was bound to lose again.

“It is time for Atiku Abubakar, the 76-year-old presidential candidate of the PDP, to come clean over two issues clouding his campaign: his health status and his scandalous confession of how he colluded with his former boss, Chief Olusegun Obasanjo to fleece the Nigerian treasury, using the special purpose vehicles after he became Vice-President in 1999.

“We have it on good authority that Atiku indeed fell ill while missing on the field. He was indeed in the UK for some medical help, though handlers camouflage that he was there on the invitation of some British officials at Whitehall, in a mimic of the earlier visit of the APC rival, Asiwaju Tinubu,” the statement partly read.

While countering the allegations and attack by Tinubu, the Atiku, Okowa Campaign Organisation said he (Tinubu) had no moral standing to put to disrepute the impeccable character and integrity of Atiku.

In a statement issued by the spokesman of the campaign organisation, Kola Ologbodiyan, he said his principal (Atiku) had refrained from Tinubu’s appalling health issues before the ignoble public dance of the Tinubu/Shettima Campaign.

“The campaign also describes as ludicrous the failed attempt by Tinubu, the famed Lagos property stripper, who has gained notoriety as corruption personified and the living example of the artful dodger, to impugn the impeccable character and integrity of the incoming peoples’ President, Atiku,” Ologbodiyan said.

But not yet done with the verbal tirade, over the week, the spokesman for the APC Presidential Campaign Council, PCC, who also serves as the current Minister of State for Labour, Productivity and Employment, Festus Keyamo, returned fireworks from Tinubu’s camp.

Keyamo said Tinubu’s campaign council has forwarded a petition to the anti-financial crime agencies – the Code of Conduct Bureau, CCB, the Economic and Financial Crimes Commission, EFCC, and the Independent Corrupt Practices and other related offences Commission, ICPC, seeking the arrest and prosecution of the PDP candidate, Atiku.

He further disclosed that he had given a 72-hour ultimatum to the anti-graft agencies to “arrest/invite, interrogate and prosecute Atiku, failing which he said he would go to the courts to cause the agencies to act.”

Tinubu’s camp, speaking through the PCC at its headquarters in Abuja, with the full complement of his media directorate, also queried the sources of wealth of both Atiku and Obasanjo, his erstwhile principal.

The PCC also played a two-minute recorded voice call purported to be a conversation between one Messrs Achimugu and Atiku bordering on allegations of corrupt practices.

The Campaign Council alleged that Atiku had committed a Breach of the Code of Conduct Act, Criminal Breach of Trust, Conspiracy, and Money Laundering.

But while countering the allegations, the PDP dismissed Tinubu’s calls and allegations against its presidential candidate. It described them as simulated allegations and attempts to divert public attention from the issues affecting Nigerians.

“It is indeed ironic that an embattled Tinubu, who is beleaguered by uncountable cases of fraudulent activities, including perjury, forgery, treasury looting, corruption and narcotic-related conviction can attempt to impugn on the unimpeachable integrity of the PDP Presidential Candidate,” its National Publicity Secretary, Debo Ologunagba alleged in a statement.

The spokesman of the Atiku, Okowa Presidential Campaign, Kola Ologbondiyan, also in a statement issued in Abuja on Monday, demanded the immediate arrest and questioning of Tinubu for his alleged formation of a uniformed gang of thugs code-named “Jagaban Army” for the sole purpose of committing an electoral heist.

“The Jagaban Army, which is apparently set up to disrupt the 2023 general elections and raid polling units for votes on behalf of APC Presidential candidate, Senator Bola Ahmed Tinubu, is a direct affront to the Nigeria Armed Forces and other security agencies, as well as an assault on the sovereignty of our nation.

“The notion of Jagaban Army is a ploy to bring hoodlums, thugs and gangsters together under cover of the APC and turn them into an official militia that will be used to unleash mayhem on the day of the election,” Ologbondiyan said.

Meanwhile, the Human Rights Writers Association of Nigeria (HURIWA), on Tuesday, slammed Atiku and his counterpart, Tinubu, over engaging in campaigns of calumny against each other.

HURIWA’s National Coordinator, Emmanuel Onwubiko, in a statement, said both candidates are two sides of the same coin since both sides are claiming that their opponent has been found to have allegedly committed the same offence of money laundering they are accusing each other of.

“The case of APC and PDP is very laughable. It is because both Atiku and Tinubu are accusing each other of the same offences that they allegedly said each other committed.

“At least, a spokesman for Tinubu’s campaign and serving minister, Festus Keyamo, confirmed that the APC presidential candidate forfeited $460,000 in one of the 10 US banks linked to him and that he ‘mistakenly’ stayed in the same house as drug barons,” Onwubiko said.

Speaking concerning the verbal war between the duo, the spokesman for Peter Obi, Datti Baba-Ahmed Campaign Organisation, Yunusa Tanko said if it were to be in a sane society, the two candidates would not have the moral standing to run for election.

Tanko said it is only in Nigeria that you will see such a heavy accusation with proof into the public domain, yet shamelessly people would still be willing to run for election.

He further urged Nigerians to vote out those who have put the country in a perpetual poverty by voting for the Labour Party presidential candidate, Peter Obi.

“I watched some of these interviews and my system usually gets upset. In a normal sane society, these two characters do not have the moral standing to run for election in Nigeria.

“It is only in Nigeria that you will see such a catastrophic accusation with proof into the public domain, yet shamelessly people are still willing to run for election and some are even thinking about the situation of even voting for such an individual. It is so demeaning and so embarrassing.

“I will only call on Nigerians to look at the credibility, character, consistency and compassion of Peter Obi, to please use their power of voting to do what we call simultaneous equation by eliminating those who have put us into a perpetual poverty and vote them out of power and vote for Peter Obi.

“That is the only thing I can tell Nigerians because I don’t have the power, my only vote cannot bring Peter Obi. I can only use my mouth to advocate for Nigerians to ensure that they vote for Peter Obi, at least to serve as a deterrent to those who feel they can hold Nigerians captive because of their personal greed, their interest and their corrupt tendencies because they want to continue to perpetuate themselves into power,” Tanko said.