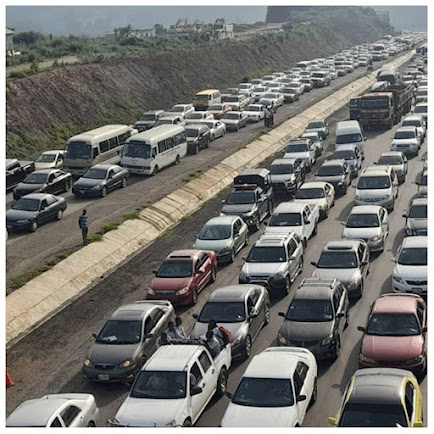 Thousands of commuters are currently stranded on the Abuja-Keffi ExpressWay as the Federal Government on Sunday morning closed a section of the major Ado Bridge for repairs to avert its collapse.

The commuters who embarked on early Sunday trips to various parts of the Northern and Eastern parts of the country are presently in the scorching heat of the sun as their vehicles are held up in long queues of more than ten kilometres.

Apart from the long distant travellers, members of various churches especially Living Faith, otherwise known as Winners Chapel could not access the road to their churches due to the blockade of the bridge against the traffic.

The closure of traffic on the Ado Bridge linking the One Man’s Village portion of the expressway is responsible for the traffic congestion.

Our Correspondent noted that commuters who have spent more than five hours in the gridlock are already thinking of cancelling their journey due to uncertainty on when the repair works would be completed.

It was also gathered that the traffic problem was compounded by the absence of a bypass road between Keffi- Abuja.

At the time of this report, heavy security has been woven around the Federal Government workers carrying out the major repairs on the bridge.

All efforts by our correspondent to speak with the head of the workers were rebuffed by fully armed security operatives who stood their ground that they have been directed not to allow anyone access the bridge for now.

One of the security operatives who did not want his name mentioned told newsmen that information on the bridge closure had been on for the past week adding that no one is expected to be caught unaware.

“I am aware that Churches and Mosques were used to disseminate the information that the bridge would be closed to traffic today”.

“This repair work must be carried out before the coming rainy season otherwise, anything can happen if not done before the rain begins, he said.

However, our reporter saw that the commercial motorcycle riders otherwise known as Okada operators are making brisk businesses from the passengers desperately trying to reach their respective destinations.

A drop on Okada which used to cost only N100 now attracts between N400 and N500 while several others have resorted to trekking several kilometres.

Meanwhile, adequate security has been put in place by both plain and uniformed policemen to prevent hoodlums from taking advantage of the gridlock against the stranded passengers.