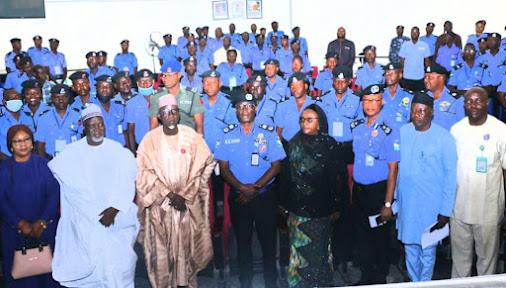 The Federal Government has commenced capacity building on conduct for officers and men of the Nigeria Police Force (NPF).

The training on emotional intelligence will focus on self-awareness,self-management, social awareness and relationship management for improved service delivery.

He said due to the demanding nature of police duties; officers are exposed to stress and anxiety, which could be transferred to members of the public.

Dingyadi observed this results in infractions, such as harassment and misuse of firearms, which affect the image of the security agency.

He disclosed the ministry is working with police management to institutionalize orientation among personnel, deepen citizens’ trust, confidence and increased participation in robust human intelligence.

“The workshop will assist in self-critique in order to strengthen weaknesses in emotional intelligence toimprove police-citizens relationship for enhanced internal security managementin Nigeria”.

The training will be held in other geopolitical zones in the coming days and weeks, with special emphasis on junior officers who constitute the vast majority and interface more with the populace.

Dingyadi added that the capacity building coincides with preparations for the general elections and advised police officers to conduct themselves properly.

“The laudable interventions by President Muhammadu Buhari’s administration in policing deserve Nigerians’ ownership and reciprocity through cooperation with the police”, he noted.

In December, two citizens – Gafaru Buraimoh and Bolanle Raheem – were shot dead by officers attached to the Ajah Division in Lagos.

Nigerians across the country groan over the recurring extrajudicial killings and harassment perpetrated by the police.

The actions, arbitrary arrest and detention, torture, illegal phone checking, assault, etc., were among the factors that triggered the End SARS protests in 2020.