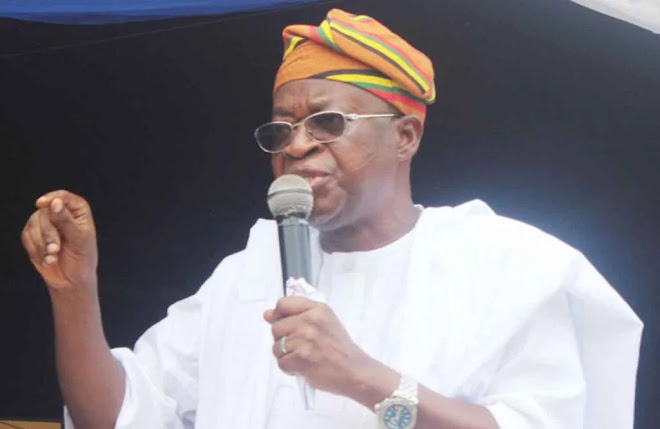 The immediate past governor of Osun State, Adegboyega Oyetola has stated that he has come back to the state to reclaim his mandate.

Oyetola made this known on Monday during an interdenominational prayer session organised by the state’s chapter of the All Progressives Congress, APC, to herald the New Year.

Oyetola who lost July 16, 2022, Osun gubernatorial election also stated that the mandate was freely given to him by God and the people of the state.

While expressing confidence in reclaiming his mandate and leading the APC to victory for Bola Tinubu and Kashim Shettima in the February 16, 2023, presidential election, he added that the New Year is a year of God’s manifest promises.

Addressing party loyalists, he stated: “I am happy returning home. I wanted to come in gently and unannounced. That was why I didn’t announce my coming, but to my greatest surprise, you were already here in this huge number to welcome me. I thank you all for your undying love and unflinching support.

“God has revealed to us that this year is a year of happiness and unending manifestations. God doesn’t fail His promises. This year is going to be a year of laudable achievements. We are going to reclaim our mandate.

Oyetola, debunking rumours that he will be relocating permanently to Lagos, revealed that he has come back fully.

The former governor who announced the start of campaigns throughout the state called on party members in the state to jettison differences and work together.

He also added that the APC was the party to beat as the nation goes into the general elections in February.

He said: “I am particularly very charged and energized by what I have seen, and I want to assure you that I will lead this party to victory by the grace of God. What I see today shows that victory is assured. Asiwaju is the man, he has no rival. Social media is not the issue. We are talking of people that have demonstrated capabilities. Go to Lagos State and see what he did. Go to Borno and see what his running mate, Shettima did. With Asiwaju/Shettima ticket banditry is over, it is going to be fought with technology.”

While calling on the party members to vote massively for the Tinubu/Shettima APC ticket, he also urged party members to collect their Permanent Voter’s Cards, PVCs, as news of close to a million uncollected PVCs was a source of personal worry to him.

The former governor who gave his farewell address to the residents of the state on November 26, 2022, left the state immediately.

In his absence, the new administration of Ademola Adeleke had alleged several misdemeanours against the Oyetola Administration, including the alleged looting of the government quarters and the taking away of official vehicles by public officials who served in the administration.

In an address to the Osun State Council of Traditional Rulers, Governor Adeleke challenged Oyetola to provide details of the loans he collected on behalf of the state.