Many injured as another petrol tanker loses control, bursts into flames in Oyo 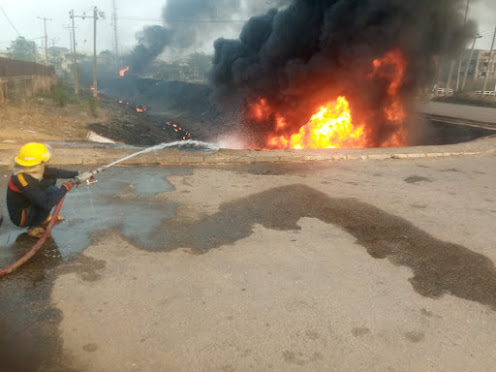 No fewer than ten (10) people sustained various degrees of injuries after a petrol tanker lost control and burst into flames in Ogbomoso.

It was gathered on Monday that the incident occurred Sunday evening.

The tanker was trying to navigate a roundabout linking the Ogbomoso-Ilorin expressway at Poat area when it lost control, a source said.

It was gathered that the tanker that was loaded with Premium Motor Spirit (PMS) lost control and fell, spiting its content.

Our correspondent gathered from sources that some of the residents of the area began to scoop the content and in the process, the tanker exploded.

It was learnt that the ten injured persons have been taken to hospitals for medical attention.

The Oyo State Fire Service confirmed the incident on Tuesday.

General Manager of the state fire service, Reverend Canon Yemi Akinyinka while speaking on Tuesday, said men of the command were able to put a stop to the fire.

Akinyinka in a telephone conversation with our correspondent said, “Yes it happened. Thank God that you called. Nobody died.

“But, some people were injured”.

Saga Gist reports that the incident is coming a few weeks after a tanker lost control and burst into flames in Ibadan.