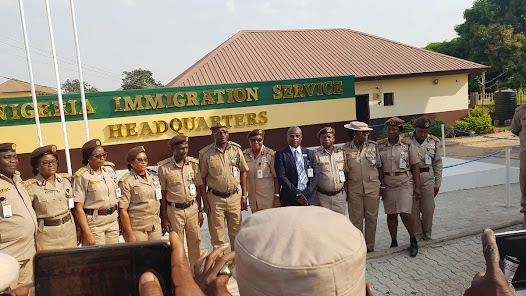 About Four personnel of the Nigeria Immigration Service (NIS) have been dismissed from service and 14 others demoted for various offences committed.

The spokesman of the NIS, DCI Tony Akuneme, in a statement issued on Tuesday explained that the personnel appeared before the Orderly Room Trial Committee of the Service before they were sanctioned.

According to Akuneme, “The move was a part of efforts to rid the Service of bad eggs and in furtherance of the Federal Government’s fight against corruption.”

The statement further explained that two other personnel were redeployed to other locations, 11 others issued warning letters and one, compulsorily retired from service.

The spokesman assured the general public that there are no sacred cows in the NIS as all offenders shall be appropriately sanctioned without fear or favour.

The statement urged members of the public to be vigilant and support the Service to deliver more on its mandate.

The statement further advised the general public to contact the NIS for feedback, inquiries and complaints on any of its channels.