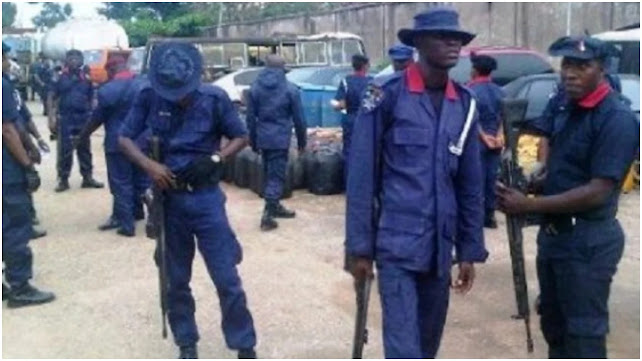 Two suspects alleged to have been terrorising Di-Nyavoh community areas of Jalingo, the capital of Taraba State, and its environs, have been apprehended by the state command of Nigeria Security and Civil Defence Corps, NSCDC.

The suspect paraded before newsmen on Tuesday in the command’s headquarters, were arrested following the tracking of some of the telephone numbers they alleged forcefully collected from their victims.

Identifying the suspects as Safianu Ahmed, 20, and Parison Hosea, 22, NSCDC Commandant Edwin Chukwudi Ugwuja said the suspect specialised in snatching telephone handsets and other valuables from their victims.

Narrating how the suspects and their gang took advantage of an accident that occurred on the 26th of December, 2022 at NATU Water junction, along Di-Nyavoh road, to rob motorists and pedestrians of their belongings, the command, he explained, had worked round the clock to track down the gang.

The Command’s Public Relations Officer, Samaila Iliya, further said “someone was knocked down as a result of that unfortunate accident.”

He added: “Following the accident, youths from the area came out to protest and unfortunately, some hoodlums came out in their numbers, took over the protest and started smashing cars, snatching phones, wallets and monies from people.”

Among the victims was an army captain and a retired commandant of the corp was one of the victims, losing his phone and wallet to the hoodlums.

A joint task force of army and NSCDC personnel eventually dispersed the mob and restore normalcy to the Jalingo metropolis.

“Through the telephone that was snatched from our retired commandant, we were able to trail these boys and these two who were paraded were arrested on 30th December 2022,” Iliya said.