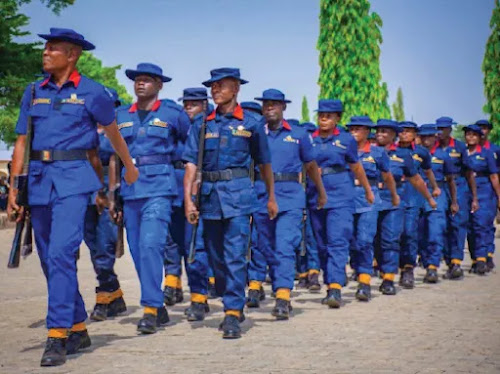 Mararaban Rido community in Kaduna was thrown into mourning as the remains of the late Fidelis Yusuf, one of the NSCDC personnel killed by bandits, arrived at ECWA Gospel Church, Mararaban Rido, Kaduna, for burial service.

Saga Gist recalls that seven personnel of NSCDC were ambushed and killed in Birnin Gwari, Kaduna, on February 9, 2023.

Speaking during a brief service, the Kaduna State Commandant of the National Security and Civil Defence Corps, NSCDC, Idris Yahya Adah told the congregation the late officer died at a time when his service is most needed.

Adah who was represented by the Deputy Commandant, Administration, CC Aminu Shaba described late Yusuf as a hero who would be remembered forever because of the active role he played as a defender of the defenseless.

According to the commandant, it is a very sad and hard moment in the lives of NSCDC personnel of the Kaduna Command, while he prayed to God to comfort the immediate family, friends and relatives of the deceased.

“We are deeply touched, because he is one of us. He was diligent to duty while alive, but death comes in different forms. May his soul rest in peace, ” he said.

Earlier, Rev. Peter Dogo, who took the text of his exhortation from the book of John Chapter 9, verse 1-5, advised everyone to have a good relationship with their creator before death, adding that the late Fidelis Yusuf was a dedicated believer who had an outstanding relationship with his God.

He advised NSCDC officers to always be faithful to God and work.