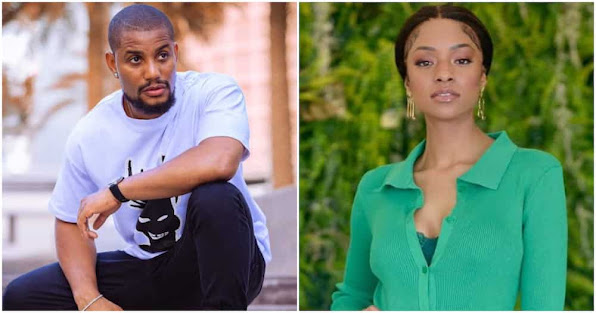 Mixed reactions have continued to trail the ongoing scandal between the popular Nollywood actor, Alex Ekubo and his ex-fiance, Fancy Acholonu.

Recall that the US-based model had last year called off her wedding with the actor a few months after their engagement.

But the reason for her decision was not communicated clearly in her write-up. A lot of netizens concluded that Fancy discovered that Alex was gay, a rumour that has been peddling around.

However, Fancy took to social media a few days ago to tender a public apology to the actor for calling off their wedding.

And that had caused a stir on the internet, with people analysing the situation. While some argued that the apology was because she was begging to get back with Alex, others conjectured that they were already back together and the online apology was the condition.

Taking to her comment section to acknowledge the post, Alex said, “I appreciate the apology. May God bless us all.”

Speaking up after his response, Fancy explained how the actor threatened and manipulated her to make a public apology.

Meanwhile, social media users, including celebrities such as Daddy Freeze, Uche Maduagwu, Nkechi Blessing and Mr Jollof all reacted after she claimed they were not sexually intimate for the five years they spent together.

Fancy, who stated that his refusal to touch her was difficult for her to understand, revealed that she can’t categorically confirm or deny if Alex is gay.

Reacting to this, actress Nkechi Blessing mocked the revelation, noting that it could never be her to date someone for five years and never get sexual with the person.

Uche Maduagwu said, “Finally, the truth is out, not all that glitter for Nollywood is Gold. Fancy tried to cover your shame for years and had the courage to break up with you, but instead of being grateful to this good woman, you allegedly took her to repair your image. So many women have endured so much ridicule in their relationships just to protect their men, but never got appreciated.”

Reactions from other social media users:

luchioffice: “Babe you shouldn’t have fallen for that trap. That was cheap bait.”

prettymum12: “You loved Alex, but he didn’t love you one bit. You wanted to force him into marriage, and it all backfired. You wanted to marry a celebrity, but shock on you.”

_aj_purple: “@fancyacholonu, we are all aware Alex is gay and scared to come out of his closet. He just wanted to use you as a cover-up. Sorry love. May you find peace, ok. As for Alex, he should remember nothing is hidden forever, one day, the truth will come out.”

peggy1_7: “I love what you did to that Fancy of a lady, a taste of her own medicine. Vawulence is the only way.”

emilokan419: “Brother Alex, please don’t take @fancyacholonu back. She can’t eat her cake and have it. I prefer @ezinneakudo I love her for you.”

However, speaking with newsmen one Olubowale Beatrice in her reaction, said, “I don’t believe those celebrities. These people are worldly, and we’ve seen the way they live their lives even while acting. So I don’t think it is normal, there’s a reason behind it. Either Alex has it with someone else, or he’s into homosexual.”

Prince Idong said, “Based on his reason, yes, it’s possible for him not to have intimacy with Fancy.”

Suleiman Lawal said, “He might be protecting his woman’s dignity because there are some men that once they have intimacy with a lady they will lose interest. So they mostly discipline themselves to sustain their cherished relationship.”

Bankole Moses said, “That cannot be true because I don’t believe in such a relationship. Even the way I see that guy, he’s baddest with his acting in movies, I don’t believe the accusation against him.”

Joseph Mercy said, “What I see in this issue is either Alex is having intimacy with another woman, or maybe he’s gay, but I don’t think he can be gay.”

Blessing Ibe said, “See if it happens to be true that they have no intimacy, then there’s no doubt about it. Alex is into something different.”