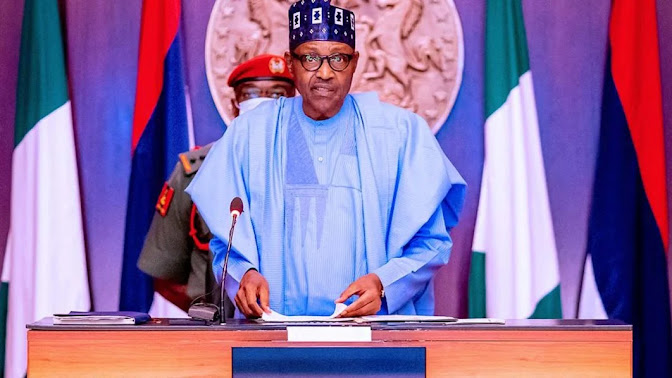 President Muhammadu Buhari and governors from five states of the federation on Wednesday endorsed a framework for the harmonisation of the digital economy, and e-governance initiatives at federal and state levels.

It was learnt that Buhari, Imo, Lagos, Nasarawa, Kaduna and Edo States Governors made this known at the inaugural meeting of the presidential Council on Digital Economy and e-government master plan in Abuja.

This is as President Buhari charged the council members on deploying a concerted approach towards implementing the initiative.

Minister of Communications and Digital Economy, Prof. Isa Pantami, who presided over the meeting on behalf of Buhari stated that there have been pockets of digital initiatives going on at the state levels which are not in alignment with the Federal government’s digital economy initiatives.

He recalled launching the National Digital Economy and Policy Strategy (NDEPS) in November 2019 with eight pillars which required the involvement of actors at all levels.

The President said the digital economy cannot be implemented in silos, with FG bearing the responsibility, adding that states and sub-nationals have a significant role to play in ensuring the achievement of NDEPS.

“Many important things have been discussed and we have agreed on all of them and it is because of this we plan to have another meeting as soon as possible.

“The secretariat has been directed to come up with frameworks for the digital economy that can be implemented in our state.

“Many states have good initiatives on the digital economy, however, there is a lack of harmonisation of their activities.

“Framework is going to be developed so that our sub-nationals will play their own role and FG will continue to provide intervention where necessary.

“From the time Mr president launched the policy to date, a lot has been achieved and in some of the pillars, more than 70 percent have been achieved. However, still, there are issues that require engaging the sub-nationals to look at decision making, implementation, coming up with frameworks, getting their input with regards to regulation and many more and that cannot be easily achieved. It is because of this, this council has been inaugurated, today is our first official meeting after the inauguration by Mr President”, he said.

He further made a case for the establishment of the Ministry of Digital Economy in states to cascade and implement activities at the national level.

“Also after the launching of the policy, the ICT sector contributions to GDP increased significantly to the extent that the sector alone without involving digital services, contributed 17.9 per cent which is unprecedented in the history of Nigeria. With the accommodation of our governors and subnational, I believe many positive things should come out of the sector”, he stated.

The Presidential Council was launched to strengthen the capacity of the government, to develop, adopt and deploy digital technologies to make government more efficient and transparent.

The council is also to ensure the improvement of Nigeria’s global standing in the ease of doing business index.

Meanwhile, the Governor of Imo State, Hope Uzodinma has stated that he will immediately inaugurate the Ministry of Digital Economy towards e-governace implementation.

Uzodinma disclosed this in an interview with Journalists after the council meeting.

He said, ”this is a very good idea and we are going to participate. On the level of digitisation in his state, he said there are sectors and pillars. First, we start with proper record keeping, and collection of data and then digitalise the infrastructure department has to be put in place.

”Before this meeting, I was about creating an agency to manage our digital economy but I am going to now create a full-blown ministry of digital economy and IT management in the state as soon as I get back. That is to tell you the kind of attention we are going to give this subject, I will also support a well-thought-out policy in making sure we have a robust digital economy that will create jobs and employment for our youths.

“I am happy to be a member of this council and will do my best to contribute my quota towards national development”, he said.

The Governor of Edo State, Godwin Obaseki stated that the harmonisation of the digital economy initiative will help stamp out waste and duplication in governance.

He added that if Nigeria can get it right on harmonized digital economy strategies, the impact will be tremendous.

In his words, “I am glad we finally have a council in the country that will set the record on the digital economy as the world is about digitisation.

“In Edo State, we have already initiated a lot of IT activities, Edo Best educational platform runs on technology, where all our 15,000 teachers have devices, we are implementing technology in our primary health care centres, we have hubs on our own and they are not aligned with what is happening nationally, so this council helps align the different initiatives on digitisation from different parts of the country so that we can reduce the waste that comes with non-alignment and also gain momentum and speed in terms of implementing digital strategy as a country. If we get it right nobody can stop Nigeria in digitisation”.

Similarly, the Minister of Industry, Trade and Investment, who represented the Secretary to the Government of the Federation, Mr Otunba Adebayo said the Federal Government will invest in homegrown technologies to reduce costs and drive the digital economy industry.