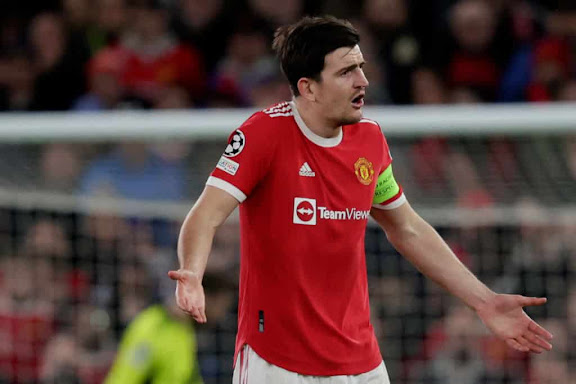 Erik ten Hag showed that he is a manager that has the guts to take whatever decision that he feels will suit the team. And dropping the captain was one of those decisions.

Harry Maguire has come under fire from last season for his lack of quality on the ball and off the ball and it was something the Manchester United’s manager took notice of in both games in which the 29-year-old has featured in this season.

Manchester United fans have been calling for the club’s captain to be dropped and the manager has now obliged. Truth be told I know Erik Ten Hag very well and I know he is going to give everybody a chance to prove themselves and drop those that won’t impress him and the manager has done exactly that. He gave Harry Maguire the chance to prove himself in Manchester United’s first two games but the England international failed to impress.

I wasn’t expecting the manager to drop him so soon because I thought he was still going to allow him prove himself further, but the manager looked to have seen enough of Harry Maguire’s lack of quality. And to justify the manager’s decision, the players he chose instead of Maguire really proved themselves against a very quality side like Liverpool.

The partnership between Raphael Varane and Lisandro Martinez looked formidable and solid. They rarely gave Liverpool’s attackers any space. Martinez especially was very impressive on Monday night. He was a nightmare to Liverpool’s attacker. Varane also was very imposing and commanding at the back. I see the manager continuing with those two at Manchester United’s backline; which indicates that Harry Maguire will have to come to terms with staying on the bench a move that might hamper his chances of making it to the World Cup for England.

Brighton’s manager Graham Potter has shown his quality as a manger so far and I expect his next job to be a very big one. He came on and really transformed a very ordinary looking Brighton side. Last season they finished nineth on the log and so far this season they look promising and have been unbeaten going on to defeat the likes of Manchester United and West Ham.

The 47-year-old tactician has proven his worth in the Premier League and I think he deserves a big job. I know England have not really done badly with Gareth Southgate in charge but if they fail to win the World Cup in Qatar and he gets sacked I expect the English FA to look towards Graham Potter.

The Falconets just like the Super Eagles flattered to deceive

Having won all of their group stage matches, Nigerian football fans thought the Falconets will go all the way and clinch gold in the ongoing FIFA U-20 Women’s World Cup. But just like the Super Eagles did at the last AFCON, the Falconets crashed out in their first knockout stage match to the Netherlands.

The Netherlands looked more organized in their play and were very efficient with their finishing. While the Falconets were very disorganized and wasteful with their chances. To put things into context, the Netherlands only had three shots on goal in the first half and scored two goals from it. Meanwhile, the Falconets had over 16 shots on goal but failed to convert even one into a goal.

Going forward, the NFF really needs to employ better hands in developing our under age national teams because the quality of play of the Falconets against the Netherlands was really appalling. The quality of coaching showed between both teams. You could easily tell that the Netherlands had the better coaching education. The NFF needs to invest heavily in developing our under age teams by bringing in quality coaches to coach both our male and female teams if they truly desire to see am improvement on our football.