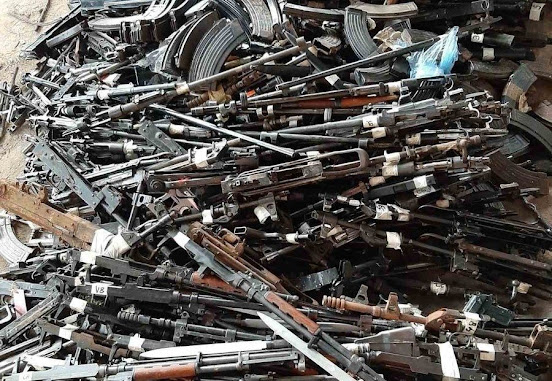 The National Centre for the Control of Small Arms and Light Weapons (NCCSALW) has taken possession of over 3,000 firearms recovered in the Niger Delta.

The National Coordinator, Abba Dikko, made the announcement in a statement by the Head of Communication, Air Commodore Ewejide Akintunde.

The retired Major General disclosed that different categories of weapons were mopped up by Operation Delta Safe (OPDS).

OPDS, composed of military troops, is a Joint Task Force operating in the six South-South states.

The officials of the Defence Headquarters, Nigeria Police Force, Nigeria Security and Civil Defence Corps, and others witnessed the handover ceremony.

OPDS Commander, Rear Adm. Aminu Hassan, who represented DHQ, made the presentation to the NCCSALW.

Dikko said the centre would aggregate all weapons recovered from the public and manage the stockpile ahead of destruction.

The NCCSALW has the mandate of retrieving illicit small and light weapons in the custody of arms-bearing agencies in Nigeria.