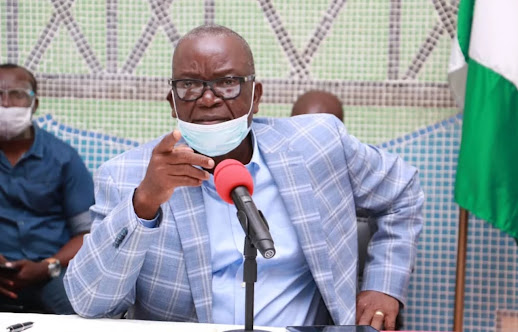 The dignitaries who showered encomiums on the Benue FirstLady spoke at a Thanksgiving Service organised in her honour at Redeemed Christian Church of God, RCCG, Gboko Road, Makurdi.

A reception was later held in Benue People’s House, Makurdi.

In his speech at both occasions, Governor Ortom described his wife, Dr. Eunice as a great woman who has supported him through thick and thin.

The Governor expressed gratitude to God for blessing him with his wife, pointing out that apart from influencing his life in a positive way, Dr. Eunice has made several sacrifices for the family.

He thanked all those who came from all over the country to celebrate the wife on her golden birthday anniversary and prayed God to also give them reasons to celebrate.

Delta State Governor, Dr. Ifeanyi Okowa congratulated the Benue State First Lady for attaining the golden age of fifty and said he was highly impressed how Mrs Ortom was described as “a woman of valor and noble character.”

Dr. Okowa pointed out that the glowing tributes showered on the First Lady by the church was an indication that she was positively touching the lives of the people.

The PDP Vice Presidential candidate urged Mrs. Ortom to dedicate the remaining part of her life to building more women to have noble characters so that they can help in making Nigeria a better place.

On his part, the PDP National Chairman, Dr. Iyorchia Ayu commended Mrs. Ortom for her love for children and passion for the growth and development of women and youths.

Dr. Ayu also expressed appreciation to the First Lady for working with her husband, to ensure that more women in the state are given the opportunity to serve in both elective and appointive capacities in line with the vision of PDP.

Tor Tiv, Professor James Ayatse who spoke on behalf of the traditional institution said they were proud of the First Lady for what she has been doing to add value to development and urged her to continue with the good work.

The celebrant and founder, Eunice Spring of Life Foundation, Dr. Eunice Ortom thanked God for granting her the opportunity to celebrate the new age and blessing her with the good things of life.

The celebration was also attended by first ladies of Taraba, Nasarawa and Kebbi states as well as former first lady of Imo state among others.