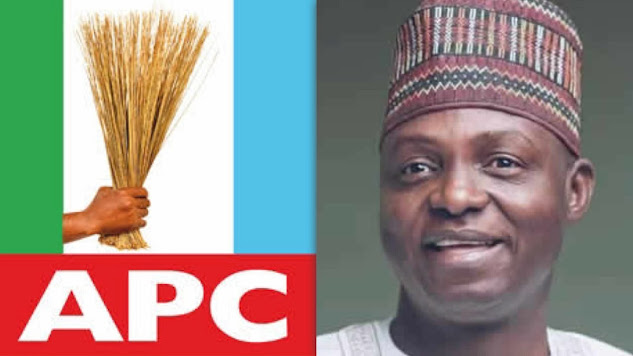 The gubernatorial candidate of the ruling All Progressives Congress (APC) in Plateau State, Dr. Nentawe Yilwatda on Thursday presented his running mate, Pam Bot-Mang to the Jos South traditional council, at the palace of Dagwom Rwey of Jos South, Da. Ngah Dangyang.

He said Pam Bot-Mang was not picked as the running mate because he is Berom from Jos South but because of his track record of integrity, self-reliance and humility to add electoral value to the ticket.

Yilwatda noted that his relationship with Bot-Mang started during his secondary school days about 40 years ago, when he served him as a schoolboy diligently for four years without revolting.

He praised the Berom nation for grooming and raising credible children with the fear of God and noted that he was also raised by a Berom man who moulded and impacted him positively to overcome societal challenges.

“We will engage, empower and employ Plateau youths and dedicate 10 percent of our resources to the youths to enable them become economically self-reliant.

“We will be transparent, free, fair and run an all-inclusive government while the youths will be mentored and appointed as commissioners and other positions.”

He acknowledged the insecurity, kidnapping and other forms of criminality ravaging the state and said stringent measures would be taken to address the menace to secure the people.

The Dagwom Rwey of Jos South, Da. Ngah Dangyang who received Pam Bot-Mang, praised his leadership qualities and said history is about to repeat itself where he is preparing to fill the vacuum of his late father who was a Deputy Governor to former Governor Joshua Dariye.

He urged them to work together as partners in progress by complementing each other and prayed for their success during the election.

In his address the running mate, Pam Bot-Mang who spoke earlier, appreciated the Berom nation for supporting him and said he will not disappoint the people of Plateau State who entrusted him with the mandate.

Bot-Mang described the visit as significant and said the APC places high premium on Jos South Local Government Area where they are trusted with the Deputy Governorship ticket, Plateau North Senatorial ticket and the House of Representatives ticket.

He solicited the support of the people and assured them that if elected, he will right the wrongs made in the past for the prosperity of the people.

Chairman of Jos South Local Government Area and House of Representatives candidate for Jos South/Jos East Federal Constituency, Gideon Davou under the platform of the APC, in his remarks said the Berom nation is blessed with the state party chairmanship position, Deputy Governorship candidate and a Senatorial candidate and urged the people to support the APC during the general election.

The team also visited the Berom Educational and Cultural Organization (BECO), Berom Women Development Association (BWDA) and the Berom Youth Moulders-Association (BYM) and canvassed support ahead of the 2023 election.

The BECO President, Da. Gyang Dudu said the Berom people are accommodative and hospitable and urged them to manage the ethnic and religious diversity.

He urged Yilwatda to work assiduously to give the state its identity of “peace and unity”, and wish him well during the election.