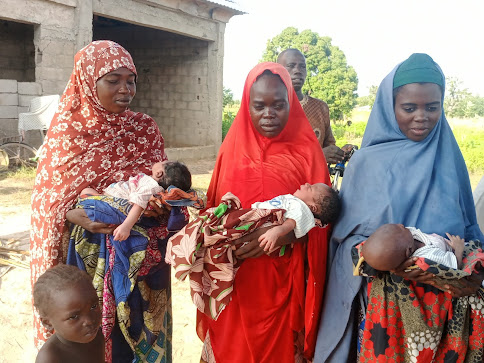 One of the leaders of the Karnaya community, Falalu Ado, disclosed this to newsmen at the IDP camp.

Karnaya community is one of the worst hit areas by the ravaging flood that rendered thousands of families homeless.

Ado said about 25 women have given birth in the IDPs camp following their displacement within two weeks of their relocation.

Malama Ruqayya Sani is one of the nursing mothers who gave birth to a bouncing baby boy and was named after the Emir of Gumel, Ahmad Muhammad Sani, to show their appreciation for the emir’s efforts in supporting the community ravaged by the flood.

“I gave birth at the IDPs camp and I am lucky enough there were no complications,” Ruqayya said.

Hadiza Badamasi is also another nursing mother who gave birth to a baby girl at the IDPs camp and was named Fatima.

“I thank Allah SWA, I gave birth to my daughter on Friday around 1:00 AM at the IDPs camp without any complications with the help of a traditional birth attendant.”

The Executive Secretary of Jigawa State Primary Health Care Development Board, Dr. Kabir Ibrahim, said the government had provided at least three vehicles for the emergency in Karnaya community.

“Women have no reason to deliver at the camp because they are closer to nearby health facilities in Dutse, Shuwarin and other places which are just 15 minutes drive,” Dr. Kabiru stated.