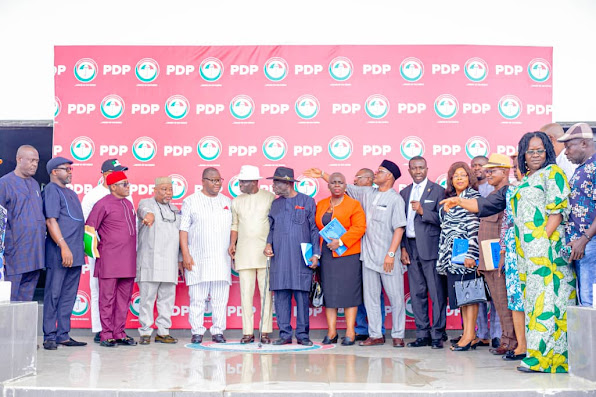 The post primaries reconciliation committee of the Peoples Democratic Party, PDP, Akwa Ibom State, has submitted its reports to the State party secretariat.

Saga Gist reports that the party after the primaries inaugurated an 11-man Reconciliation Committee headed by Senator Effiong Bob, with a mandate of reconciling aggrieved members back to the party.

Chairman of the committee, while presenting the report to the party Chairman, Aniekan Akpan explained that his committee had written letters to all categories of aspirants who took part in the just-concluded nomination processes of the party to appear before the committee for discussions and dialogue.

Senator Bob said, “Mr Chairman, one of the driving tenets and staying strategies of our Party, the PDP has always been the high value we place on all categories of our members. Sir, you have given this committee the strict directive that all categories of people who appear before the committee must be granted fair hearing.

“From aspirants and candidates of the State House of Assembly seats up to the Gubernatorial candidate and aspirants, we had reached out to everyone. We even had to host a Zoom meeting where we brought aspirants who were out of the State and the country to join us in the committee.

“I, therefore, stand here to report to you on behalf of the committee that we had painstakingly listened to all issues brought before us by eminent members of our party who honoured our invitation to appear before the committee.”

Bob further hinted that both those who eventually emerged as candidates, as well as those who did not emerge as candidates, were brought together to engage in a rich and robust dialogue with a view to forging new bonds, make efforts at harmonising interests, as well as point them to the array of opportunities and possibilities that working together as a team could open up for everyone ahead of the elections.

He said it is the belief of the Committee that if the recommendations of the Report were thoroughly implemented, it will go a long way in deepening the taproot of the party in Akwa Ibom, keep members united, and perpetuate the streaks of victory of the PDP in the State.

Senator Bob thanked the party for entrusting them with the responsibility of leading the reconciliation efforts, noting that from the findings of the Committee, the PDP in Akwa Ibom State was intact and strong.

While receiving the report, the State Chairman of the Party, Rt. Hon. (Elder) Aniekan Akpan after commended them for the effort and industry they have invested in handling the task assigned to them by the Party and assured them that the Party will take time to study the recommendations contained in the report, with a view to speedily implementing them in the interest of enduring peace, unity, progress and success of the party.

“I commend you for a job well done. I have been following the activities of the committee and it was very pleasing to see that all of you were so committed to attending the many sittings you held. On many occasions, you rose from your sitting as late as 7pm. Judging from that dedication, it is clear that all of you gave this important assignment the seriousness it deserved. For this dedication and painstaking job, the PDP in Akwa Ibom State is indebted to you in gratitude,” he said.