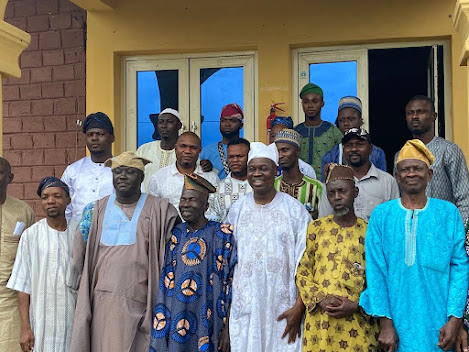 Nine (9) families within the Atiba lineage have called for the discontinuation of the ongoing selection process of the new Alaafin of Oyo.

The nine families, who addressed a joint press conference on Monday, urged the Oyo State government to stop the ongoing selection process in the interest of peace, justice, equity and fairness.

Saga Gist reports that the throne of the Alaafin of Oyo is currently vacant.

The position became vacant as a result of the transition of the 45th Alaafin of Oyo, Oba Lamidi Atanda Olayiwola Adeyemi 111. Oba Adeyemi who reigned for 52 years joined his ancestors at the age of 83.

Our correspondent learnt that no fewer than 119 princes have indicated interest in the throne. Thirty (30) contestants have been screened as of last Thursday.

Nine of the families within the Atiba lineage have, however, called for the discontinuation of the ongoing selection process. The families, through their representatives, made this disclosure during a press conference held at Akinmorin community in Oyo.

Spokesperson of the 9 families, Prince Afolabi Ademola Adesina, who noted that 11 families within the Atiba lineage were recognised as the occupants of the throne, wondered why only two families, Agunloye and Alowolodu have been rotating the throne among themselves.

Adesina called on the Oyo State government to use its power to stop the process until all issues were resolved.

He said that there were some pending cases that should be settled before a new king emerges.

Adesina insisted that eleven families within the Atiba lineage were entitled to the Alaafin throne instead of the two: Agunloye and Alowolodu, that have been rotating the throne among themselves.

He said, “11 royal families who are sons and descendants of Atiba are entitled to the throne and not only the Alowolodu and Agunloye.

“We are calling on the Oyo State government to stop the process until the pending cases are finalized. We are demanding equity, fairness and justice.

“Agunloye has ruled for 4 times, while Alowolodu has ruled for 3 times. 11 sons were captured. The panel of enquiry said that all the 11 sons of Atiba and their descendants have the right to become Alaafin. Why will they be favouring the only two families, Agunloye and Alowolodu.

“‘The law is not for only two families, it is for the whole Oyo town. There are cases in the courts, they should allow the judges to finalize the cases before they select the new Alaafin.

“We urged the State government to wake up to write its own history. We beg them to stop the process. It is injustice. Only two families are the beneficiaries. All the other nine (9) families are affected”.